The Nevermore Park immersive art experience officially opens to the public on October 24th, in the neighborhood of Pilsen. “A neo-futuristic take on Chicago — where black culture and heroes are at the forefront”. Art lovers, tourists, and curious locals alike, can live in the creative mind of Brantley while enjoying the culturally rich and urban atmosphere of Chicago. “This project is about reclaiming history—both in the United States and in the city of Chicago—through a lens that speaks to empowerment and gives agency to a historically disenfranchised community,” says Brantley. 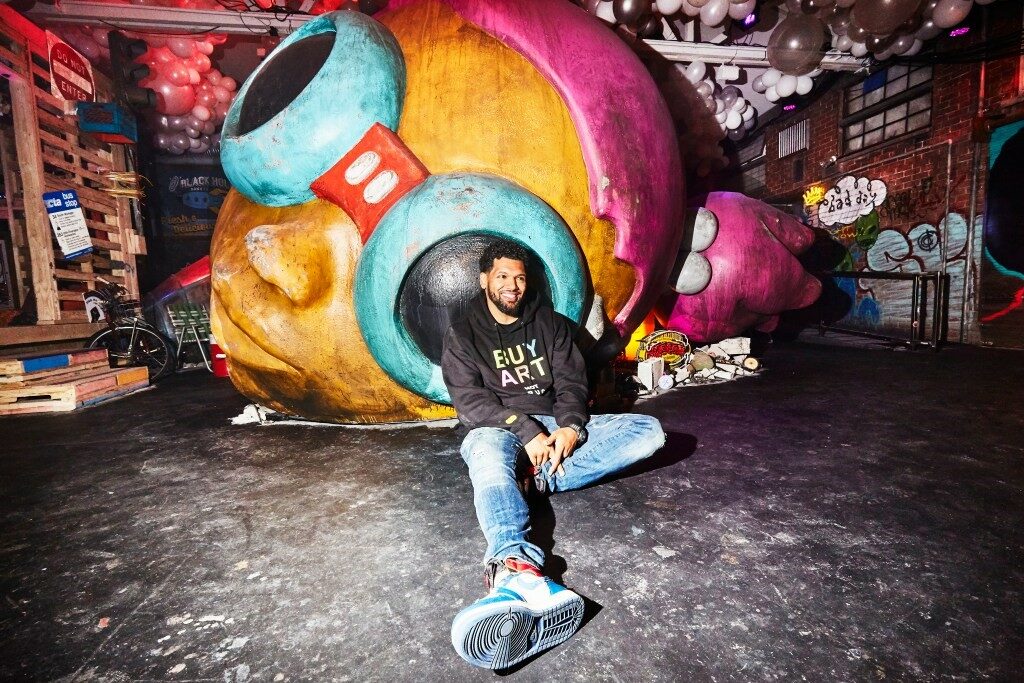 On October 16th, in a packed room at Soho House Chicago, Artist Hebru Brantley, graciously spoke to an intimate and attentive gathering of collectors, supporters, and fans about his latest project. Nevermore Park is a 6,000 square foot immersive art experience that is meant to be transportive and transformative while presenting an exciting alternate reality environment filled with new sights and sounds. Powered by the imagination of Brantley, visitors will get the chance to spend a day in the life of his iconic characters, Flyboy and Lil Mama. 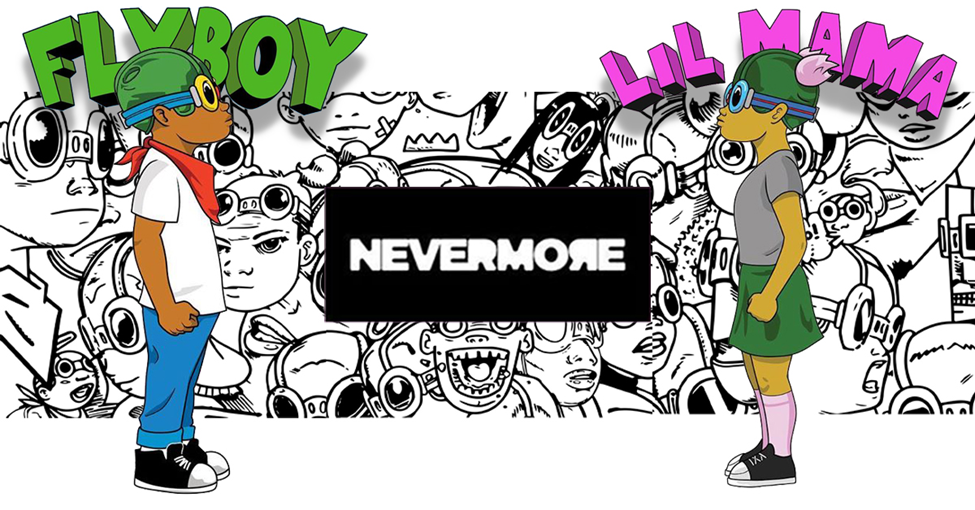 “There has never been a prescribed narrative for these characters. People had begun to attach their own narratives to the story of Flyboy but would still ask what the origins of these characters are. So I wanted to take a step back and treat it like one would treat a novel, a comic book, or a great piece of literature, and give an origin and a destination to these characters. It took about two years to sort of work through and make something that wasn’t whack (he chuckled). But it reinvigorated me and gave me the go-ahead. Sometimes repetition can be a killer, so Nevermore breathed new life into me.” 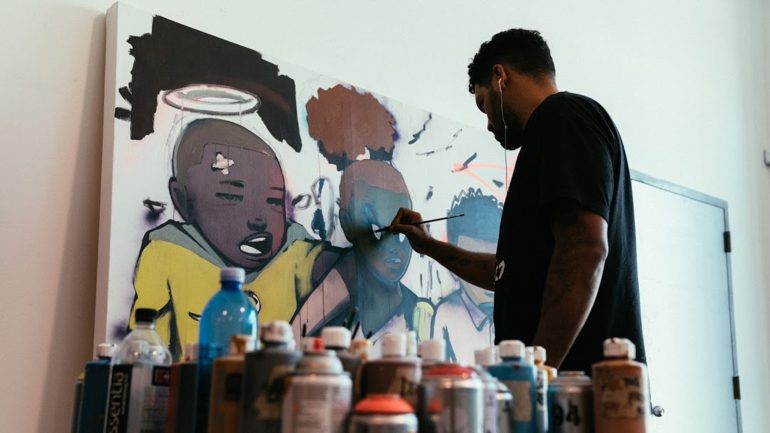 Brantley’s artwork is in the collections of George Lucas, Jay-Z and Mayor Rahm Emanuel, to name a few. The prolific artist has remained grounded and humble as he continuously brings his art to the city of Chicago both publicly with sculpture installations and murals, and privately in commercial art spaces and museums. 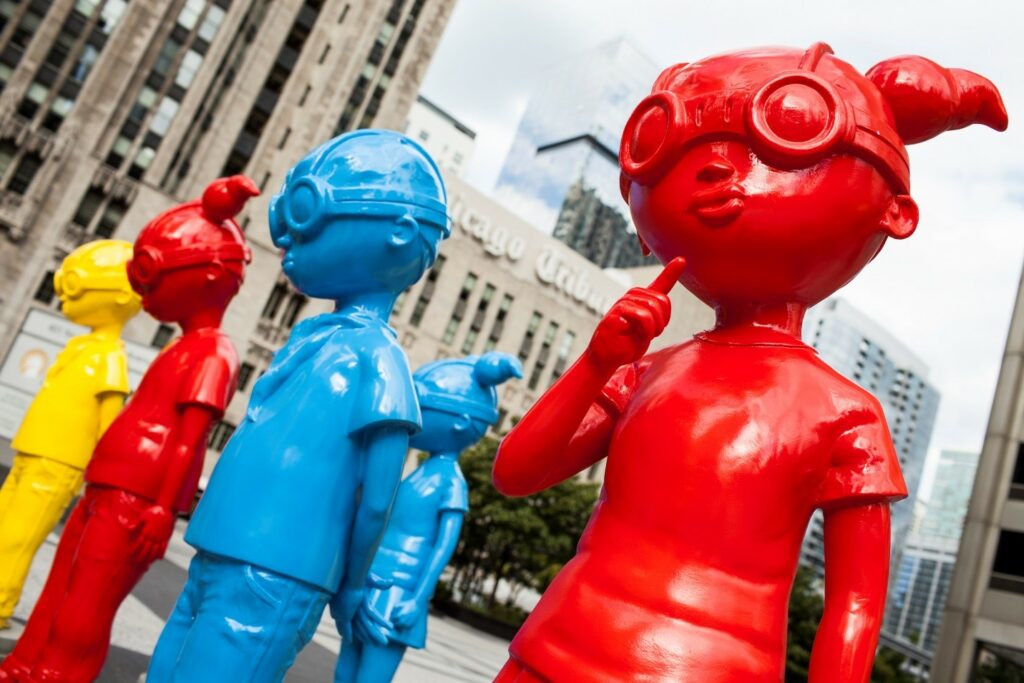 While his murals and sculptural works are playful and approachable, they often have serious undertones. Although very successful and highly collectible, the artist had hit a wall and quickly used his creative genius to think of ways to involve his home communities in a new way of storytelling through art. In the following quote, he explains how he was ready to take his ideas to the next level.

“It had gotten to a point where I was doing it and keeping up with repetition because it was expected, but I was kind of stretching it. I felt that there were things that I wanted to say through the use of these characters, but overall I was kind of spent,” Brantley explained to a captive audience last Wednesday evening. “I don’t think it was a block, but I just got bored. You know, Dr. Seuss rhymed until he was dead. I feel like I could keep doing the same thing, but I also felt like I owed it to myself and to those who have gone with me on this journey to do more and challenge myself. So that’s sort of what Nevermore was, and what Nevermore became—a challenge. How do I bring forth this world in this next phase of this idea, this creation?” 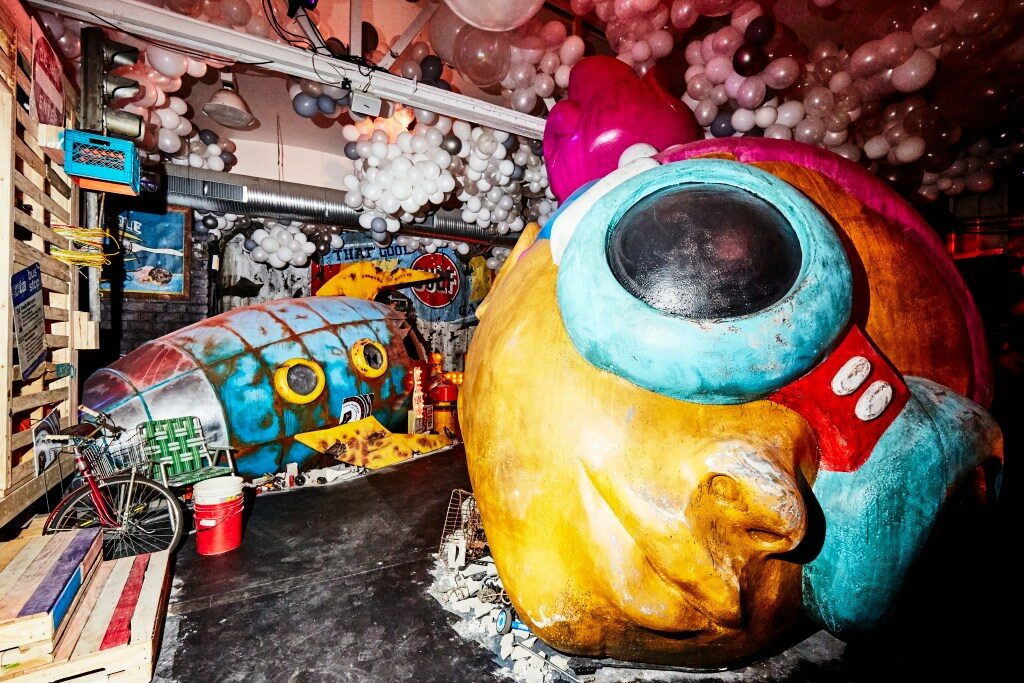 The project was created in partnership with Madison Wells Media Universe (MWMU) and Brantley’s own entertainment production company, Angry Hero.

Brantley’s interactive experience is not just a mere popup, it activates space that takes participants through the fictional hometown of the artist’s beloved characters Flyboy and Lil Mama, while simultaneously taking guests of all ages through the empowering storyline of black youth.

“It’s a world. I was really meticulous in the way everything fits. Being reenergized, I wanted to put something out that I was really excited about; I wanted people to feel like they were going down this Alice and Wonderland rabbit-hole with me, and then the idea for Nevermore came about.” 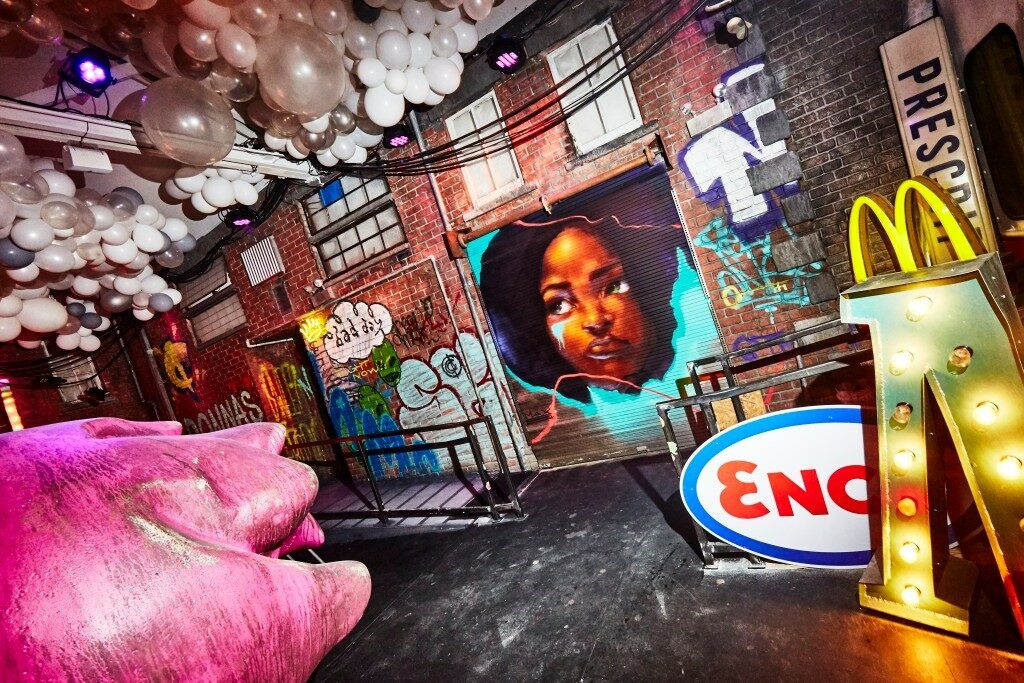 Chicago is very famous for its parks. It is how areas and neighborhoods are identified: Hyde Park, Jackson Park, Douglass Park, Lincoln Park, etc. Nevermore is a fictional place but it attaches itself to an identity that is associated with space in the Chicago tradition. 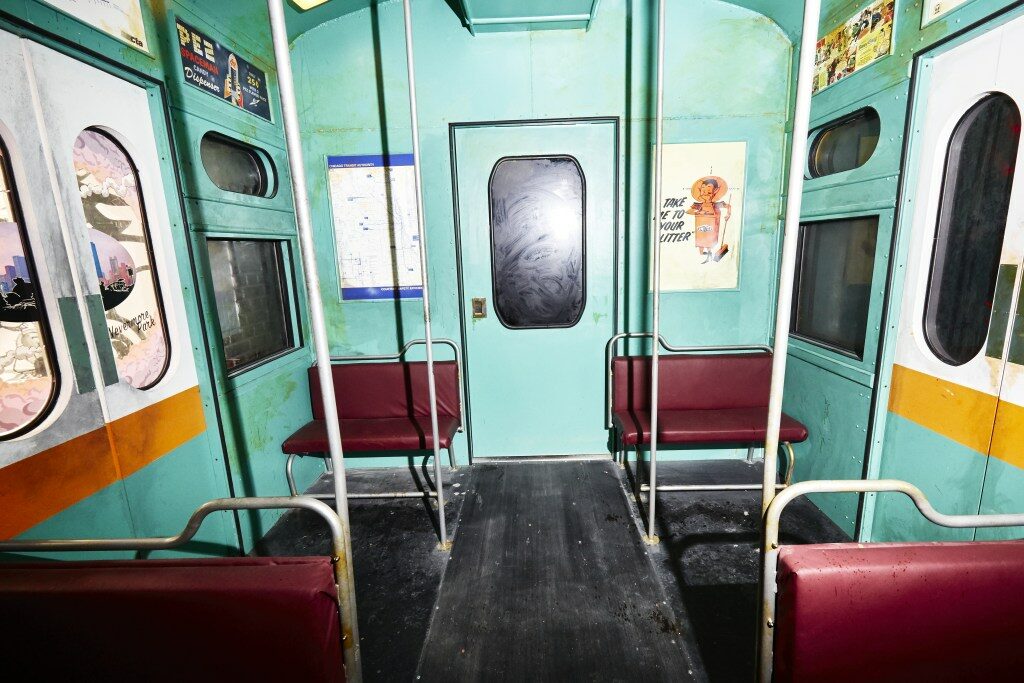 Everything experienced after the ticket is stamped and the coat is checked is completely immersed within the world of Flyboy and his friends. Upon entering, attendees experience a gallery of paintings and sculptures, the artwork that is most associated with Hebru Brantley. But at the furthest part of the gallery, there is a large painting that has been blown through, inciting entrance into the world of Nevermore, and simultaneously commenting on how Brantley moves about the art world on his own terms. The artist wanted everyone to experience the space on their own, without a lot of directives, this allows visitors to insert themselves in and out of the stories that are presented. Photos, videos, and cellphone usage are encouraged. The experience takes about an hour to navigate through. 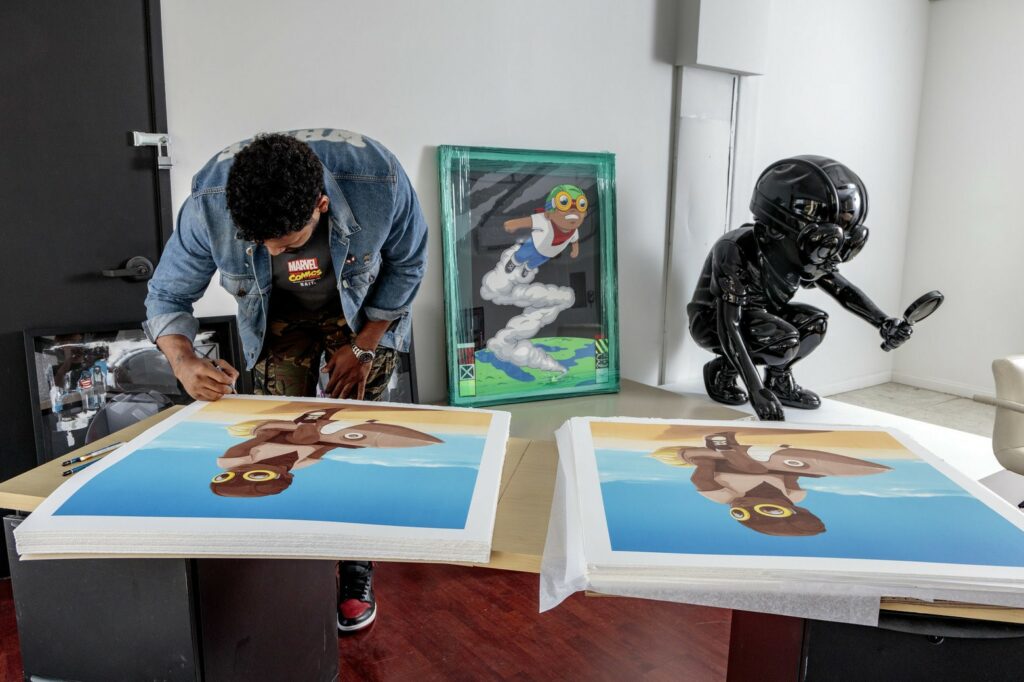 Before leaving the space, there is an opportunity to take elements of Nevermore home while shopping the gift shop filled with Hebru Brantley merchandise. “One thing that I’ve learned as an artist and being able to control my own narrative is also learning to control my own merchandise,” Brantley says. “For me, that’s a very important part. Though I’m a creator, I’m also a collector, and I buy tons of useless shit that I love (he laughs), and I want my supporters to be able to have that same opportunity.” 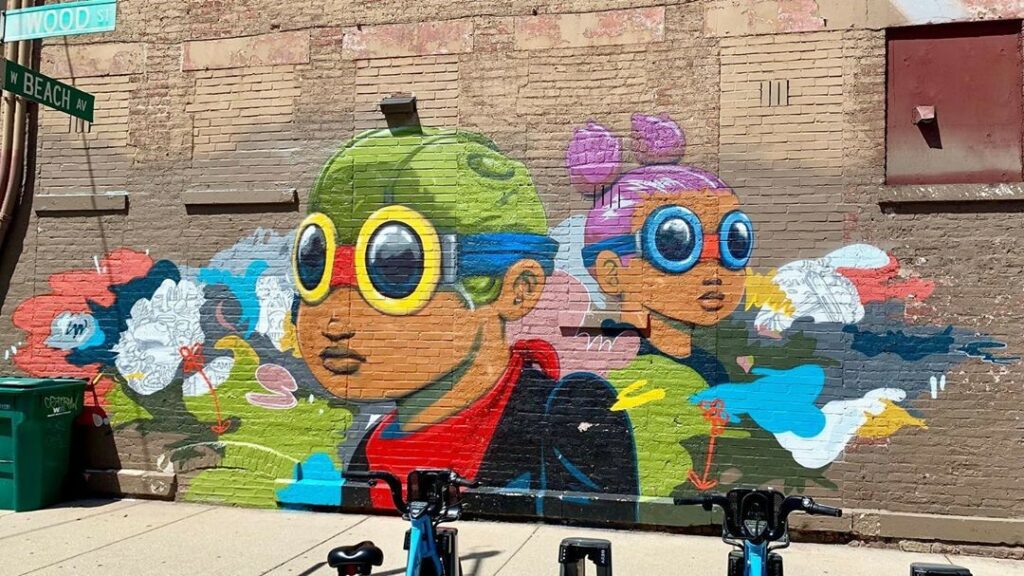 Chicago is the first destination for the Nevermore popup experience. It was an obvious choice with Brantley being a native son of Chicago’s Southside, but he wanted to make sure that Chicago was not getting the short end of the stick when it comes to cultural experiences for children of color within marginalized communities. “When it came to Chicago getting really cool shit, I felt like we would get it way, later on, if at all. Chicago is the space that grew me, for me, this is where everything started, so I wanted to have it here first and give back,” said Brantley. Chicago had/has a reputation of not supporting local artists as strongly as they support artists from elsewhere, however, Chicago has continuously supported the artist since the early stages of his career. 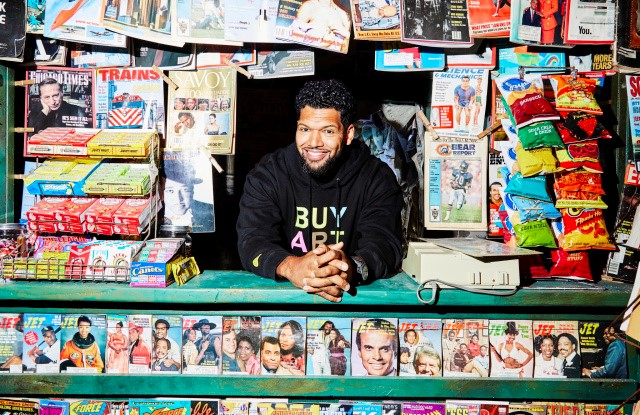 For the last ten years, Brantley’s main character Flyboy has appeared through various mediums and iterations, collaborations and merchandise. Flyboy and Lil Mama have gone from being conceptual imagery with youthful, yet strong political messages, to internationally recognized heroes. There has always been an element of mystery associated with the heroic Black wonder boy. However, with one statement from the artist, Flyboy’s enigmatic existence is revealed. “I’m going to let you in on a secret,” says Brantley.

Nevermore Park is a ticketed experience with a limited run, check out the website for more information.