David Antonio Cruz: “A Love Letter To Us”

“I’m interested in interjecting the portraiture canon with Brown and Black bodies, as well as gender fluid and queer bodies, to complicate hetero-normative perceptions of racial and queer identity and highlight intersectional identities not often discussed or represented in history and society.”- David Antonio Cruz. 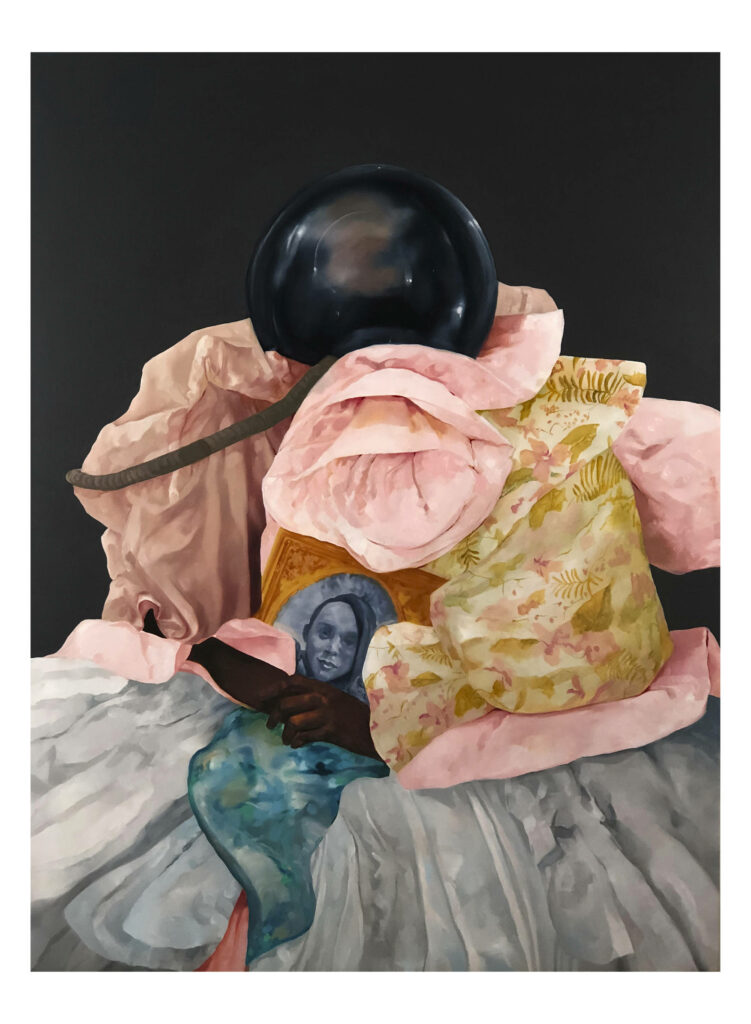 Before President Trump was officially elected in 2016, artist David Antonio Cruz felt there was a tangible, celebratory feeling brewing within the atmosphere of the United States. A celebration that did not include poor people, people of color, immigrants, or the queer community. Phrases like “make America great again”, fed the beasts of racism, classism, homophobia, and xenophobia. Echoing the quote from the late literary giant Toni Morrison, who admitted to an artist friend soon after the election of George W. Bush in 2004, that she was depressed, and unable to work. “No! No, no, no!” her friend said. “This is precisely the time when artists go to work—not when everything is fine but in times of dread. That’s our job!” And despite the difficulty of experiencing personal hardships like his mother’s passing, Cruz did just that, he went to work. “I wanted to celebrate us! I wanted us to see our beauty for ourselves without external validation. I wanted this work to be for my community; it’s a love letter to us.” Cruz said.

Lead by his longtime fascination with capturing the human experience through portraiture, Cruz began the ongoing visually poetic series titled “wegivesomuchanddon’tgiveanythingatall”, (*we give so much and don’t give anything at all). The title quickly leads us to the intersections that are at the import of Cruz’s work. Unpacked, the intersections can be simplified to, visibility—visibility and justice for a community that has been oppressed, violently subjugated, and in the very least taken for granted. 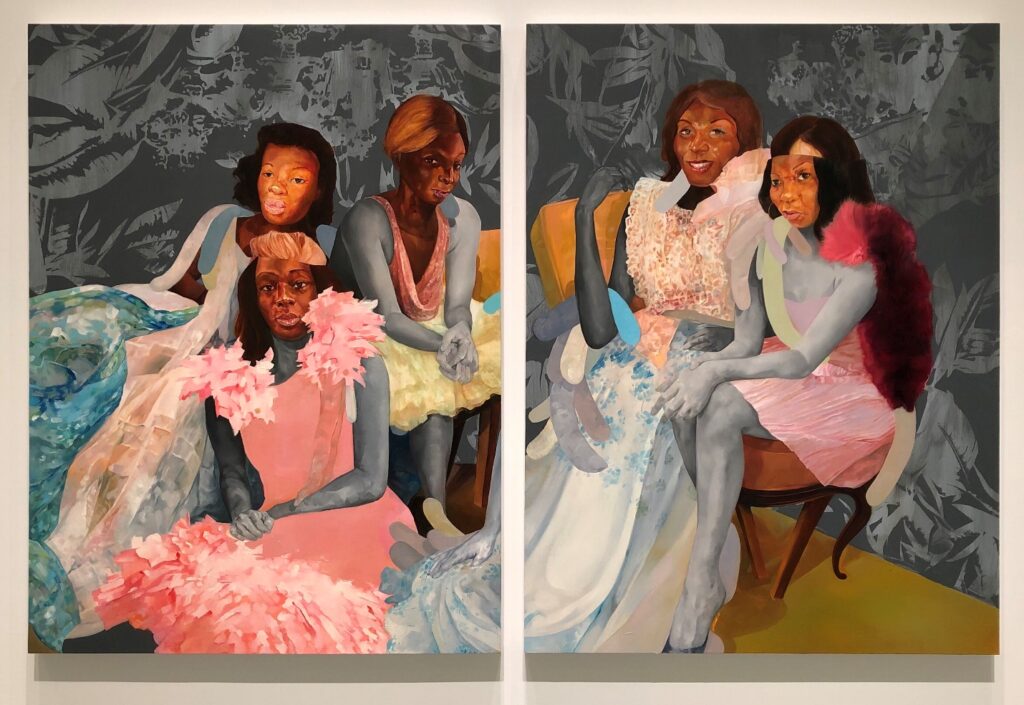 Cruz’s series slows down the quickfire viewing process that is experienced in this contemporary moment. He runs the titles of his exhibitions and compositions together to facilitate a pause, a deceleration that counters the rapidity of 21st-century image viewing. Of course, this fast intake of media, sound and video bites, loops, snippets, advertisements and retouched curated imagery can be blamed on the contemporary engagement with social media. However, historically, the presence, contributions and overall humanity of Black and Brown people, especially those of the LGBTQI community have been viewed like the sliding thumb of an iPhone user, quickly swiping from person to person, story to story, only retaining superficial data, that is then used to produce stereotyping, and stigma. Cruz’s compositions make us slow down, not just visually, but emotionally as his work does what traditional portraiture is tasked to do— reveal the interior of another human. But this artist’s work goes a step further, he is tasked to not only reveal the intimate interiority of personhood, but to also bring to the fore what should be obvious, that these people are in fact people, and matter just like those who are white, cisgender and heteronormative.

Installation view, David Antonio Cruz, One Day I’ll Turn the Corner and I’ll Be Ready For It, 2019. Image courtesy of the artist and Monique Meloche Gallery, Chicago. Photo: RCH Photographs

In his most recent exhibition, at Monique Meloche Gallery (Chicago), One Day I’ll Turn the Corner and I’ll Be Ready For It, Cruz installed a collection of various scaled paintings that bring up thoughts of beauty, femininity, family, nostalgia, and futurism, all in dialogue with African Diasporic history and the cannon of Western art. There has been a longtime tension within the queer community between cisgender white gay males and the rest of the community that does not have the same access to civil rights. With some queer objectives being normalized such as marital rights, the recent murders of trans women of color makes it clear that transgender peoples, especially those that are poor and are of color, have a long way to go before their lives are valued. Cruz’s recent work addresses the violent deaths of gender non-conforming and transgender women in a way that incites memorialization as well as the witness of beauty without othering.

“I think of painting through a sculptural lens,” Cruz explains. I have always been interested in the body and how it responds. My work is in response to the silence I cultivated growing up queer in Philadelphia, being harassed and bullied. You will see the mask motif appear in my work because I felt like I was always wearing a mask or hiding behind a shield in order to be safe. That’s why my work is so loud now. Some of the works are so seductive and bright and luscious and loud. I’m speaking out against the pain and trauma of silence that so many people of my community experience.” 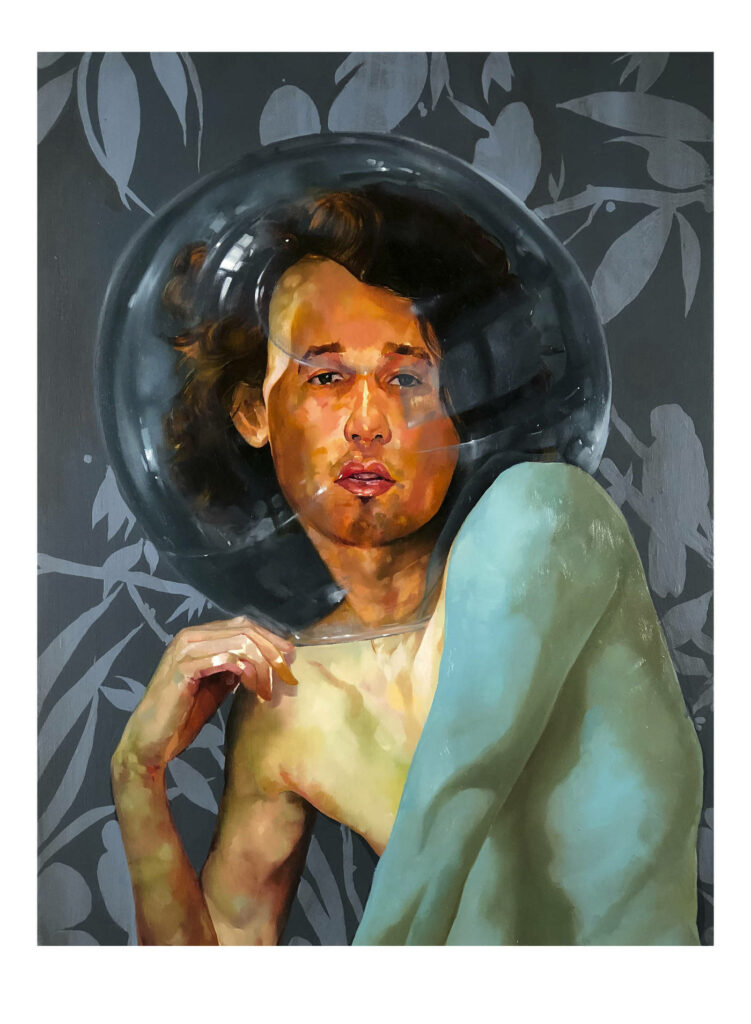 Using encoded visual tropes from the sumptuous, and frothy styles of the baroque and rococo periods, Cruz deploys notions of glamour, fashion, and femininity through the use of layering. The images of the women seem to be lit from the front as if they are performing on a prop filled stage; their facial expressions offer a come-hither look, luring the viewer into a divine world filled with symbolism, that is similar to the trappings of a burlesque show, or a cabaret act featuring a chanteuse singing a torch song dressed in velvet and chandelier earrings. These are often the accepted and celebrated images of lure from the queer community, the simulacrum of female impersonation, the outpouring of entertainment and hetero consumption of exotic culture easily found on reality shows featuring drag queens.

Once the initial read of these paintings is slowed down, the bodies and visages present as beautiful, but not heteronormative. The series is activated with an unexpected charge of understanding that these images are funerary, and the lush pictorial celebration of beauty is now understood as a memorial. The women depicted make confrontational gazes with the view or avoid the viewer’s gaze, either way, they are in control. They bear themselves with a realness that is no longer concerned with passing as normative but is concerned with being authentic. 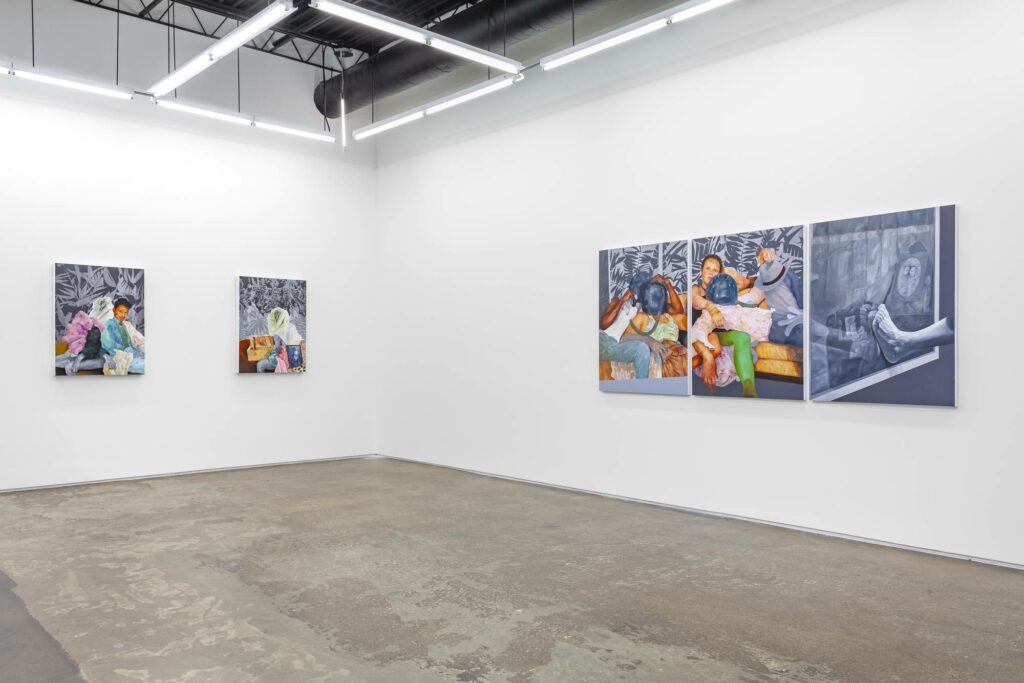 Installation view, David Antonio Cruz, One Day I’ll Turn the Corner and I’ll Be Ready For It, 2019. Image courtesy of the artist and Monique Meloche Gallery, Chicago. Photo: RCH Photography

One of the most salient works in the exhibition was a group portrait of four transwomen whose lives ended tragically to violence, entitled, *one day I’ll turn the corner and i’ll be ready for it, portrait of the Texas girls, 2019: Brandi Seals, 26, murdered in a shooting in Houston in 2017 bottom left); Janelle Ortiz, 28, murdered by a serial killer in Laredo, Texas, in 2018 (top left); Kenne McFadden, 27, drowned in San Antonio in 2018 (middle); and Carla Patricia Florez-Pavón, 26, strangled in Dallas (top right).

The women are coming out of a shadow world into the light in vibrant colors, for all to see, no longer in fear or in silence. Cruz deploys several motifs within the series such as chandeliers that represent opulence and glamour as well as a world that is dimly lit in the shadows. The queer people that Cruz images are bold, and self-possessed, as he has created a safe space for transgender and gender-nonconforming people of color to reside, without oppression, threat, violence, or even death.
The queer community is immortalized in Cruz’s work however, this series is not all only about memorialization, it also about the future. “Your fight to erase us hasn’t worked! We are still here, and we will continue to be here! Cruz loudly states throughout his compositions that show queer people living and thriving in the future.

The largest work is a triptych today, tomorrow, and yesterday; maybe we’ll find a way holding the sun. In this painting Cruz, who unapologetically identifies as a Black Latinx queer person, ventures into themes of Afro-Futurism. A genre that considers the past, present, and future as a circle, constantly in dialogue. The figures sit proudly, yet relaxed in their own worlds, carrying memories with them such a photograph and nostalgic wallpaper harkening back to the 70s and early 80s. They wear protective masks that appear to be necessary for living in the future’s toxic environment, very different from the masks that so many queer people are forced to wear in order to hide their true selves. Here, queer people are in a world of their own making, a safe place where even wearing a mask needed for breathing that can be themselves.

*words of titles have been separated in this article for readability purposes
All quotes are taken from an in-person interview the artist, October- 2019

About the Artist
David Antonio Cruz (b. 1974, Philadelphia) received his BFA in Painting from Pratt Institute and his MFA from Yale University. He also attended Skowhegan School of Painting and Sculpture and completed the AIM Program at the Bronx Museum, New York. Recent residencies and fellowships include the LMCC Workspace Residency, New York (2015); Gateway Project Spaces, Newark, NJ (2016); BRIC Workspace Residency, Brooklyn (2018); Neubauer Faculty Fellowship, Tufts University, Boston (2018); and the Joan Mitchell Foundation Painters & Sculptors Award (2018). Cruz’s work has been included in notable exhibitions at the Smithsonian National Portrait Gallery, Washington, D.C (2014); El Museo del Barrio, New York (2016); the Ford Foundation, New York (2019); the Brooklyn Museum (2019); and the McNay Art Museum, San Antonio (2019). Cruz also presented performances at Performa 13, New York (2013); and the High Line, New York (2015). Cruz lives and works between Brooklyn and Boston, where he is a Professor of the Practice in Painting and Drawing at the School of the Museum of Fine Arts at Tufts University.