Currently living and working in Lawton, Oklahoma, Robert Peterson is a self-taught artist. His spontaneous realism portraits have been exhibited and sold in galleries in NYC, Miami, Los Angeles, Chicago, Oklahoma City, Venice Beach, and Lawton, OK with his home gallery Patrick Painter Inc based in Santa Monica, CA. Petersons highly sought-after works have been collected by celebrities like Sean Diddy Combs, Swizz Beatz and Alicia Keys (The Dean Collection). Peterson’s work has been commissioned by prominent corporations such as Nike, Tony & Guy Hair, Monster Products, and Sol Republic. In January 2017, Peterson made Oklahoma history by becoming the first African American to receive the artist of the year award in Southwest Oklahoma, for his continued efforts to create amazing works of art and philanthropy. Later that same year, Peterson earned the Spectrum Spotlight Artist of the Year during Art Basel Miami out of over a thousand other artist who was showing their original works. 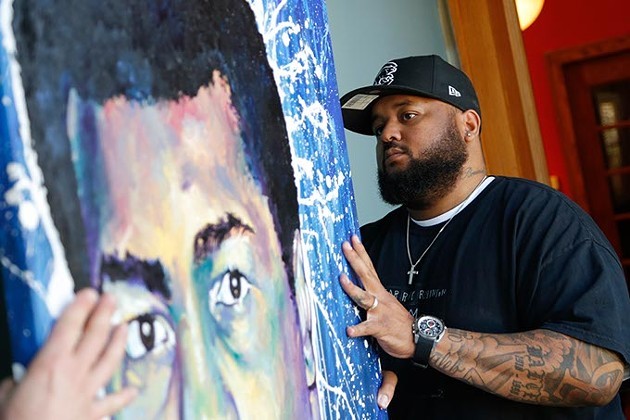 ArtX: Tell us about you as a person. Where are you based? What are your origins, where are you from?

RP: My name is Robert Peterson, I am a child of God, husband, father, son, brother and artist. Although I was born in Denver, Colorado, I currently live and work in Lawton, OK. 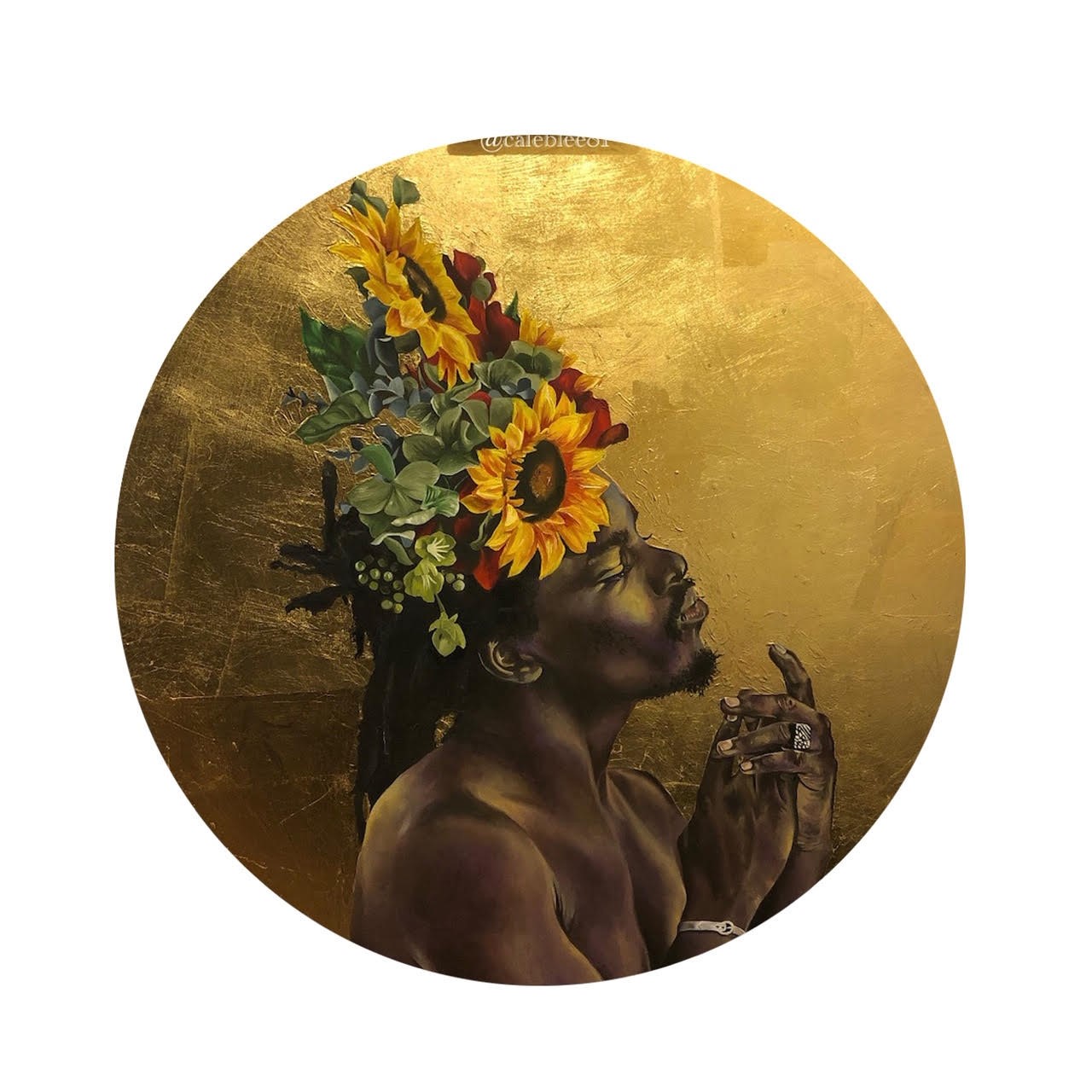 Robert Peterson, “Father, please let them see me how You see us.” 2018. Oil and gold leaf on panel. 30in round. Image courtesy the artist

ArtX: How long have you been practicing art professionally, when did you consider yourself to be a real artist?

RP: I picked up a paintbrush for the first time in July 2012 after receiving word from my doctors that I would need to have surgery to completely replace my right hip. The thought of going under the knife scared me and caused me to go into a little bit of depression and to get out of it I took up painting. It was after my 3rd or 4th painting that I began selling my artwork and used that money to take my wife and me to Mexico. I believe it was while lying on the beach that I said to myself, this is something I could really do. Eight months later in March of 2013, I found myself doing my very first solo art show in New York City with Smile Design Gallery. I ended up creating and bringing 34 pieces total and within the first four hours, I had sold 31 of those pieces which ranged in price from 1,500-5,000 dollars. I’ve been creating ever since. 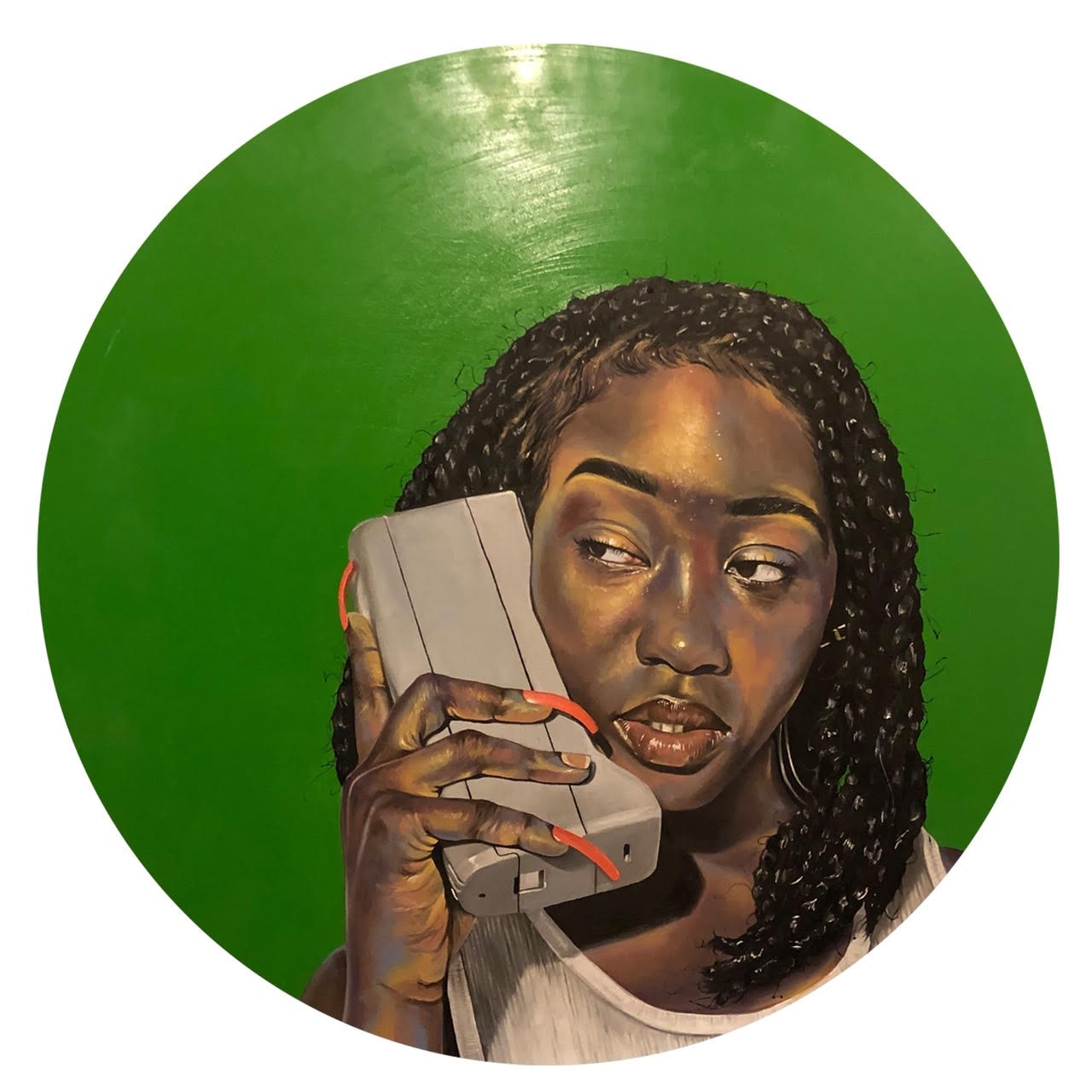 ArtX: Tell me about your training, formal and informal. Did you go to art school?

RP: As a teen, I always dreamt about becoming a successful fashion designer after watching Sean Combs and Russell Simmons speak about their clothing brands on MTV. I studied fashion design for three semesters at Parsons The New School in New York. I never thought about art or becoming an artist, I even dropped out of my 7th-grade art class because it bored me. When I finally picked up a paintbrush and realized that I could soon support my family painting, I set out to paint and create as much as possible. This mindset allowed/allows me to constantly grow as an artist.

ArtX: What medium(s) do you prefer to work with?

RP: My preferred medium to use is oil paints. I love the way you can manipulate oil paint because it takes so long to dry. I have been using this medium since 2015 after reading about artists that came before me using them on works that can still be seen in museums around the world. I want my work to live forever like theirs, so I figured why not try it out and I ended up loving it. 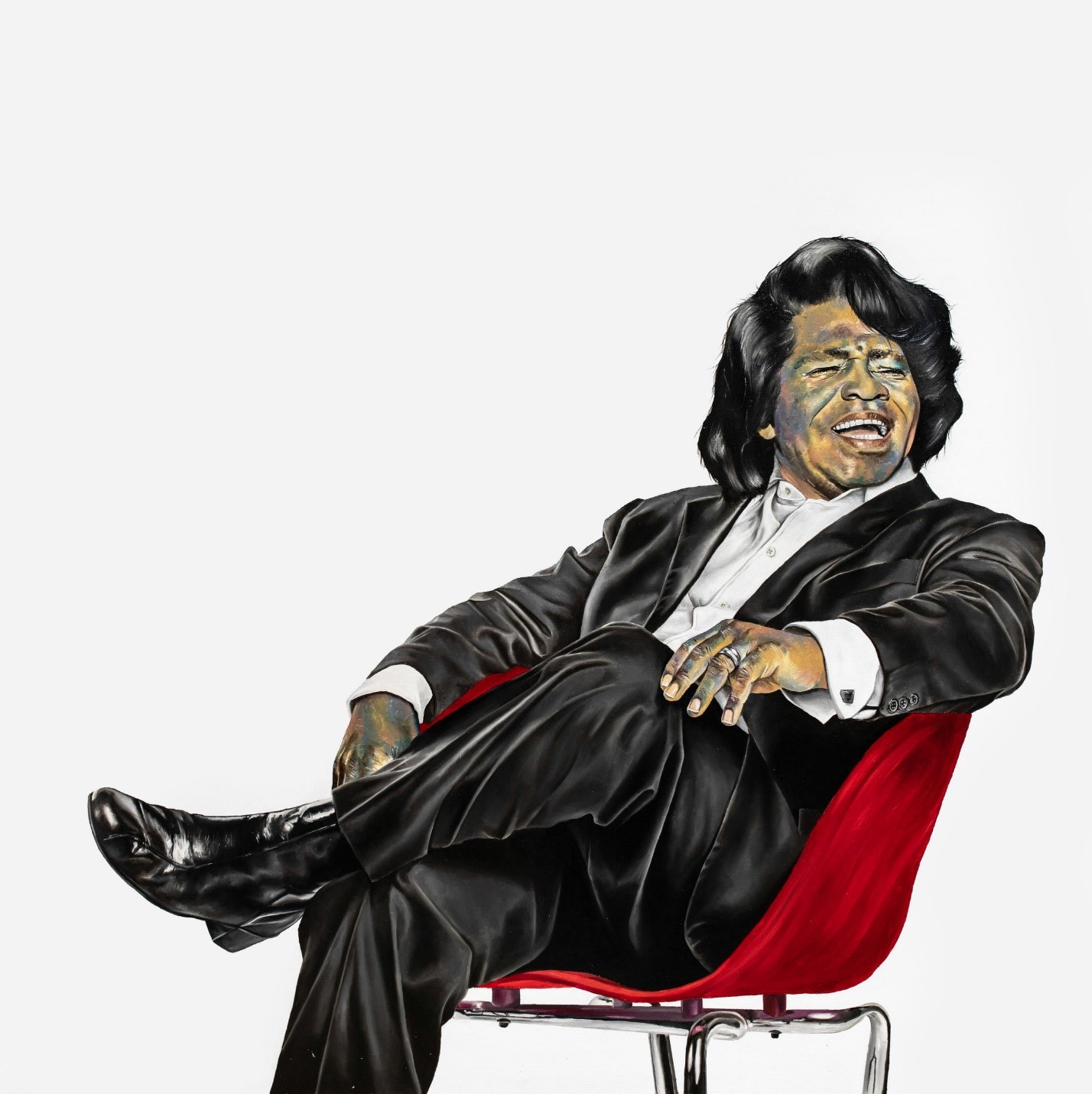 ArtX: A lot of your portrait work captures famous African-American celebrities, why do you think it’s important to capture historical figures on canvas?

RP: As an African American I feel it’s important to create works that reflect who I am, who my people are. I believe that art, whether its photography, film, writing or painting is the only way to truly capture time. My work captures people and time and allows them to live forever. 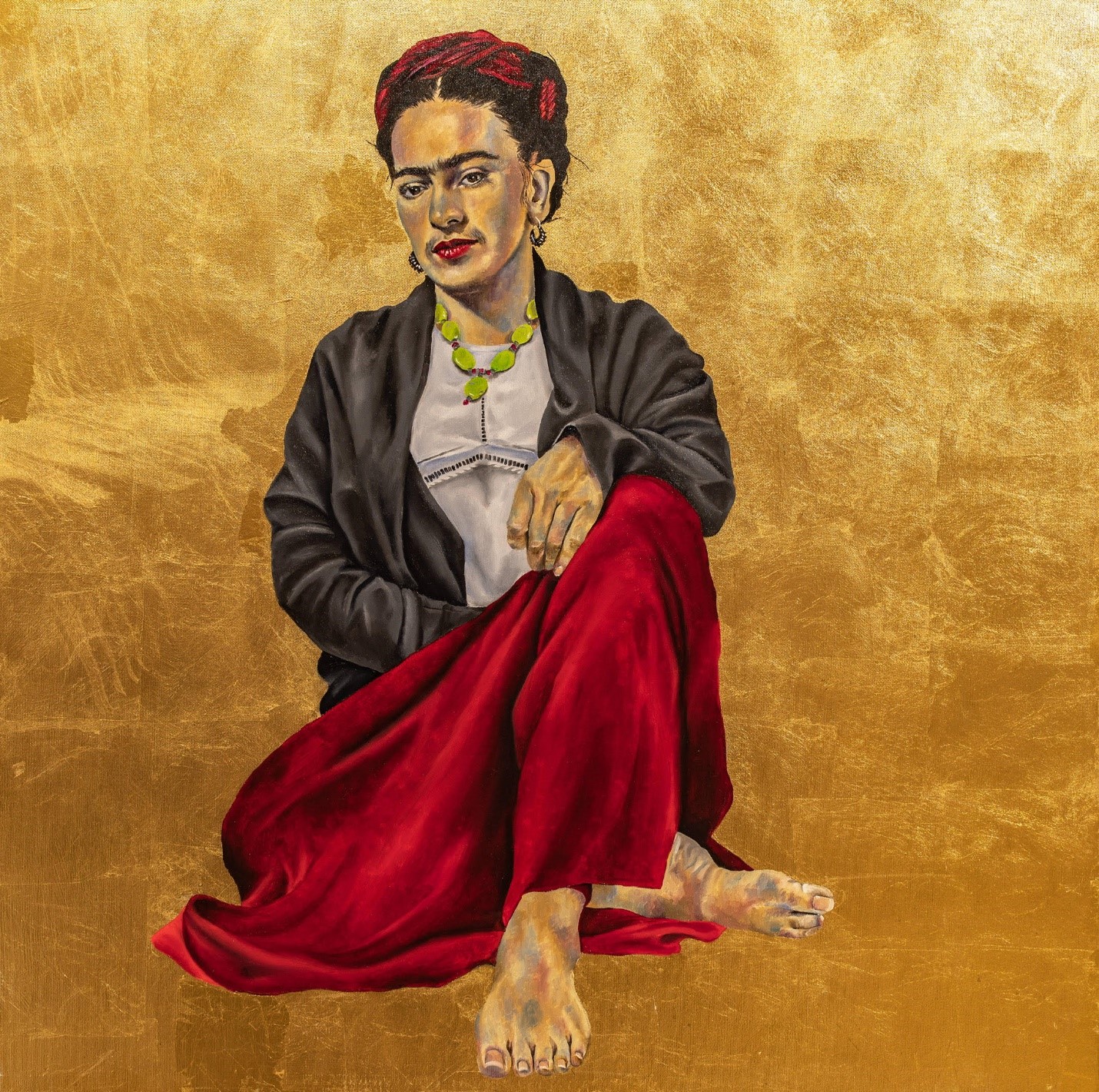 ArtX: Who are some of your art inspirations?

ArtX: Tell us about your creative process when working. Do you listen to music or do any rituals to get yourself ready to paint?

RP: When creating, I have a few things I have found that I always do. I always pray about the work that I’m about to do. In the 7 short years I’ve been painting I have seen and been a part of so many things all because of my art and the doors it has opened, and I can’t explain it other than to say it’s because of God. Also, I have to have music blasting to kind of zone out. I’m a close painter, I always get close to the canvas. I can paint for two or more hours without stepping back to see the progress of my work. I love to listen to all types of music. Lastly, for the last year or two, I have to have Ice Breakers grape gum (laughter). I don’t know why I can go through a whole container in one painting. 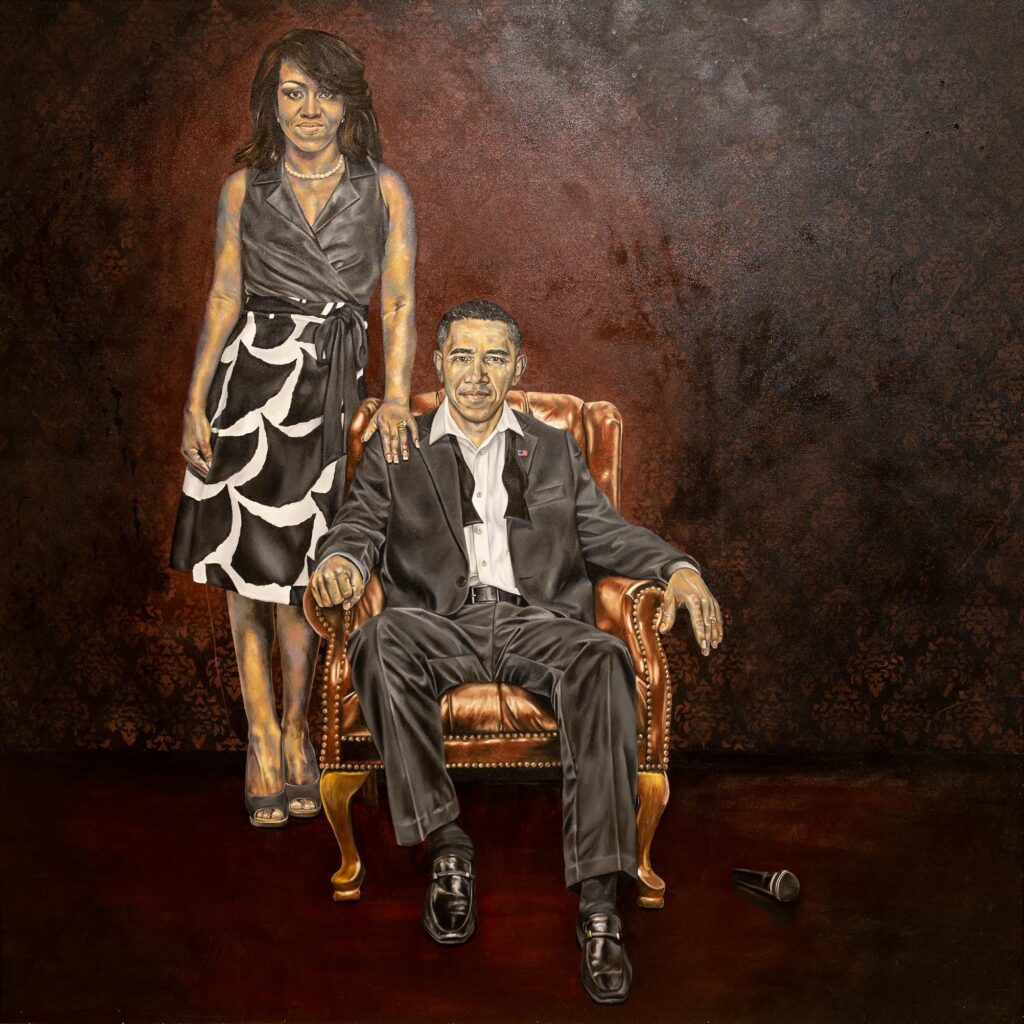 ArtX: Do you prefer to work from photographs or live models?

RP: While painting I prefer to use my iPhone to paint from. I do a lot of zooming in and out to see the details. I use both live models and images from the internet to create original pieces that look as though they may have actually been taken of the iconic figure. I did a painting of both Barack and Michelle Obama and I had a male and female model stand in for them, using a chair out of my office. I then used several images of both the POTUS AND FLOTUS to recreate their faces and photoshopped them onto the model’s bodies. I used that final image on my phone to sketch them out and paint them.

ArtX: What do you wish viewers would take away from your work?

RP: I create because I love creating, it feels good and gives me peace, I want my viewers to feel the same way. I know my work will not speak to everyone but to those it does, I want it to speak so loud that they hear it for days after leaving the exhibition. 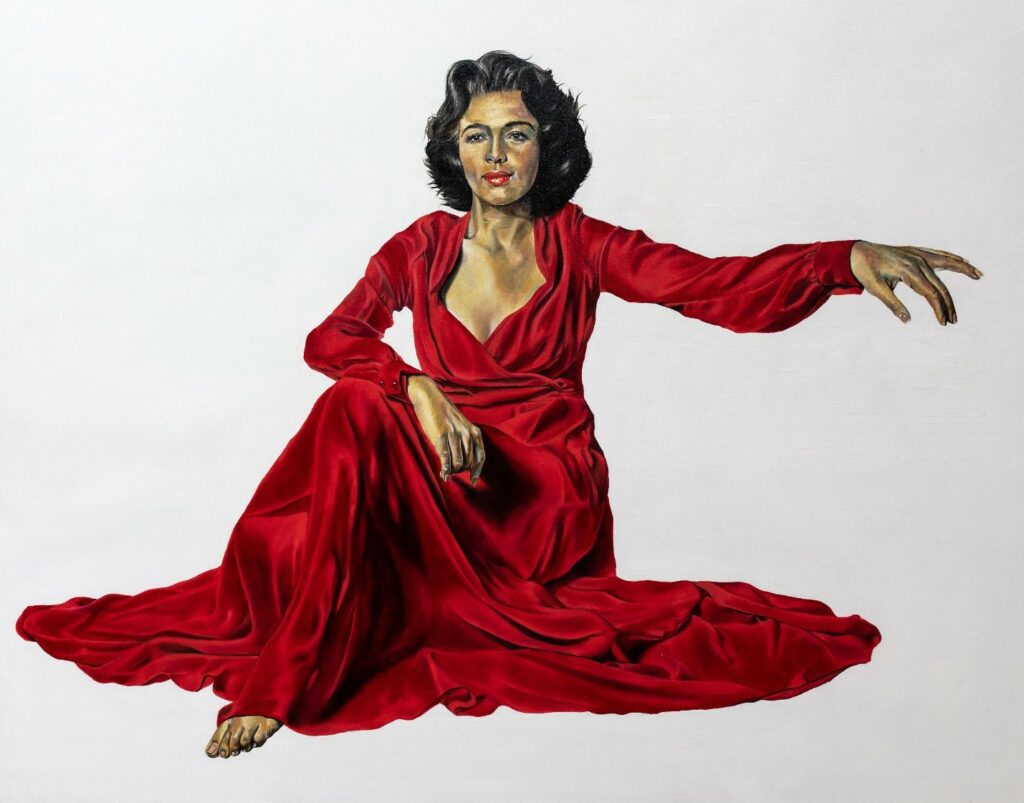 ArtX: What are your biggest goals as a visual artist? And what has been your proudest moment so far professionally?

RP: As an artist, my proudest moment was last October. Around July my wife told me that she felt she was ready to take her career as a hair stylist to the next level and open her own shop. I told her I wanted to pay for all of it, no loans, no credit cards, no investors and none of her money. I took every dollar I made from art sales in the month of September and began building her salon. The last week of October her business, Native Roots Salon, opened its doors, and by December it was voted the number two best hair salon in Southwest Oklahoma. God allowed me to do it just how I told her I was going to do it when we first spoke about it in July. 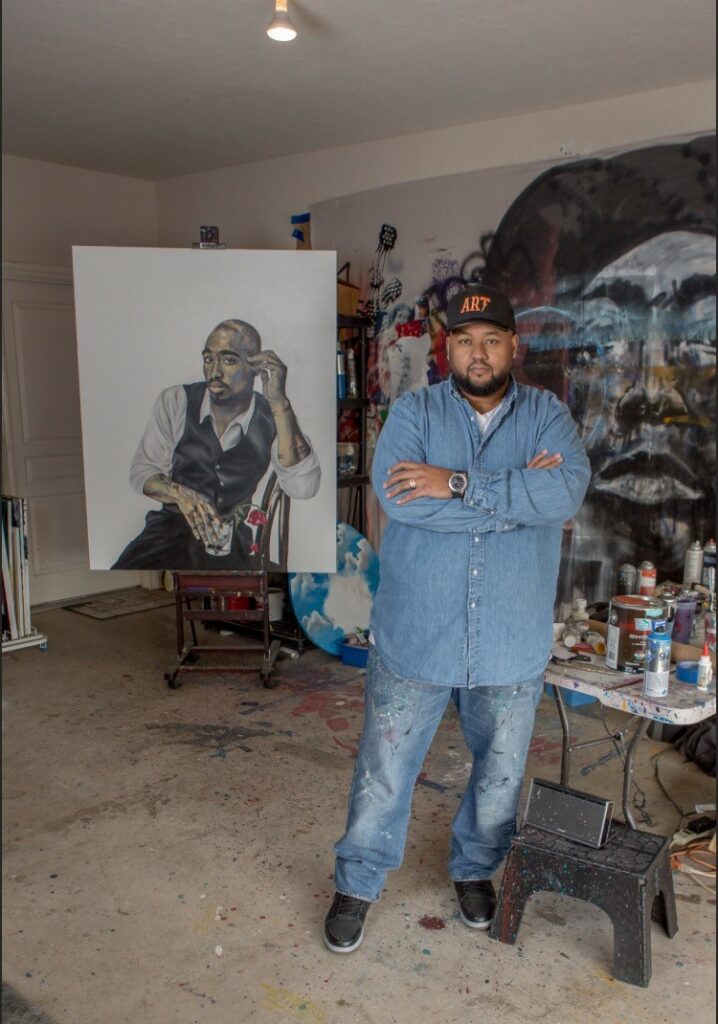 Artist Robert Peterson in his studio. Image courtesy of the artist

My second proudest moment is looking at the youth who now have a place where they can go and have hands-on experience with the arts because of the money my art has raised over the past three years. Each year I donate several pieces of art to various organizations that auction them off to raise money for the arts in the state of Oklahoma for our youth.

My biggest goal however as an artist would be to achieve the type of recognition and success in the art world that Jeff Koons & Damien Hurst have achieved, but as an African American artist from Oklahoma before my time is up on earth.