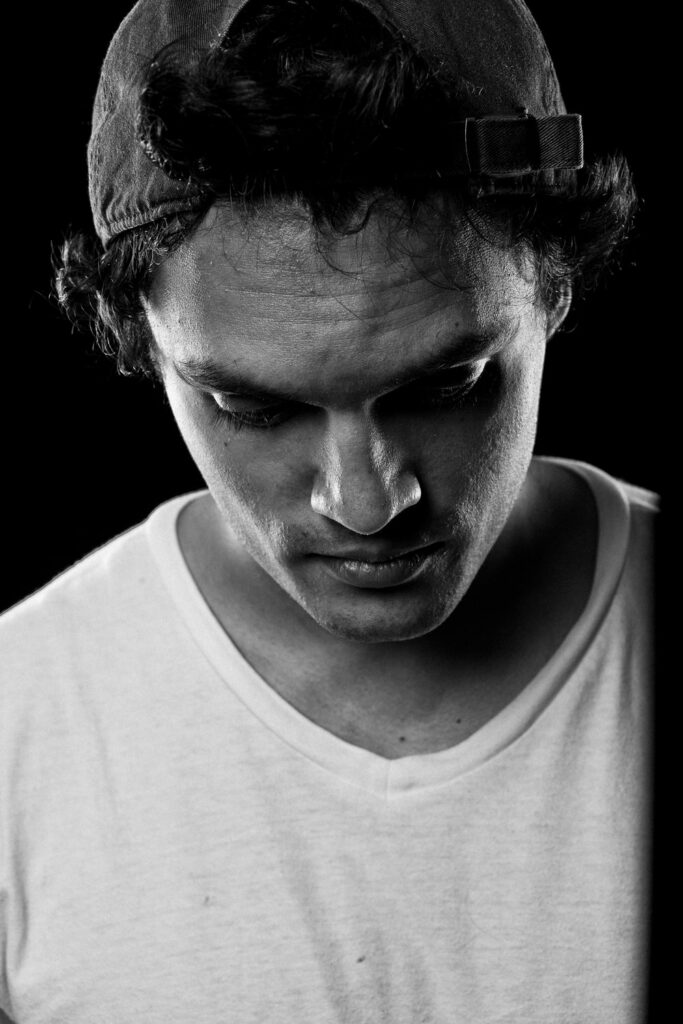 “My work uses known iconography to create new meaning. Change is what interests me. Human nature is a force leading us to inevitable destruction. The natural order of things is already creating push back. Is an evolution possible?” – NFN Kalyan

NFN Kalyan is a multidisciplinary conceptual artist, based in Miami. His paintings are usually done in series, exploring themes of social justice, politics, religion, and the human condition, all while referencing the history of art. One of his most notable series, is a group of ten paintings about Kalki, the tenth avatar of Vishnu. Kalyan deploys hyper color, surrealist montages and photorealistic imagery combined with references of well-known paintings, to tell the hypothetical narrative of Kalki’s life. What is most salient about Kalyan’s work is his varied use of scale along with multidimensional stylistic techniques that are hard to categorize as in particular genre. It is obvious that the artist desires to provoke thought and deeper meditation, even if it causes controversy. 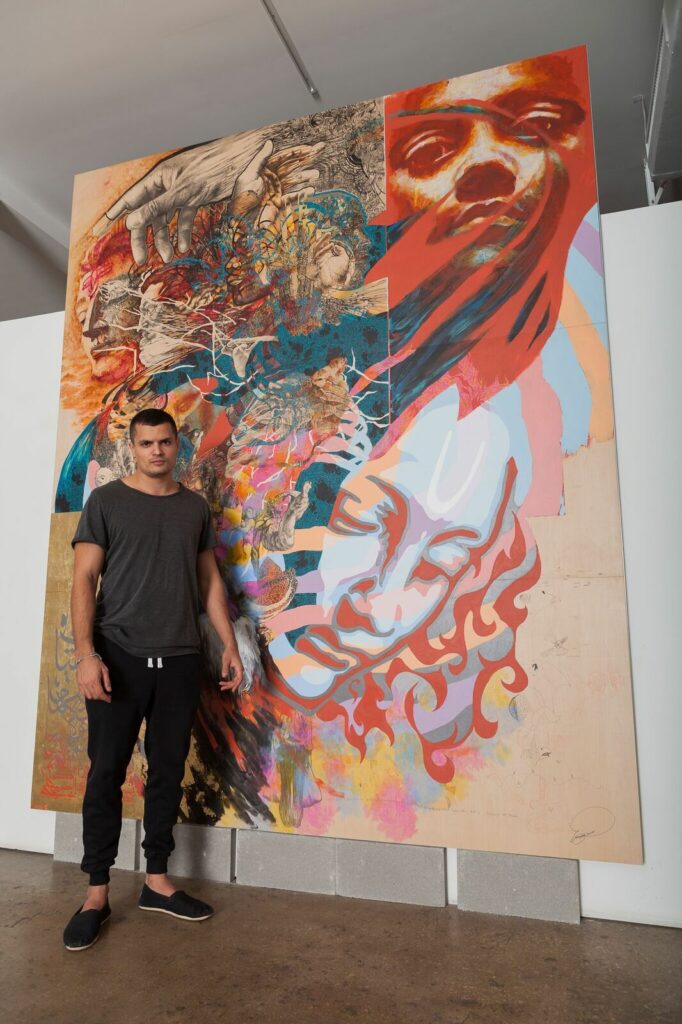 ArtX: Tell us about your origins. Where are you from originally, and where are you based now?
NFN: I was born in upstate New York to two college professors. My father, a mathematician and my mother, a Ph.D. in philosophy. I grew up in Wisconsin but also spent some years in India. My father is from India. I moved to Miami about 14 years ago, and that is where I live now.

ArtX: You have an interesting name. Where does it come from?
NFN: My legal name is just “Kalyan” and legally if you have only one name, it must be your last name so “NFN” stands for “no first name.” I use it for my art because so many artists go by just one name, but really, they have two. I really just have one, but I like using the two. 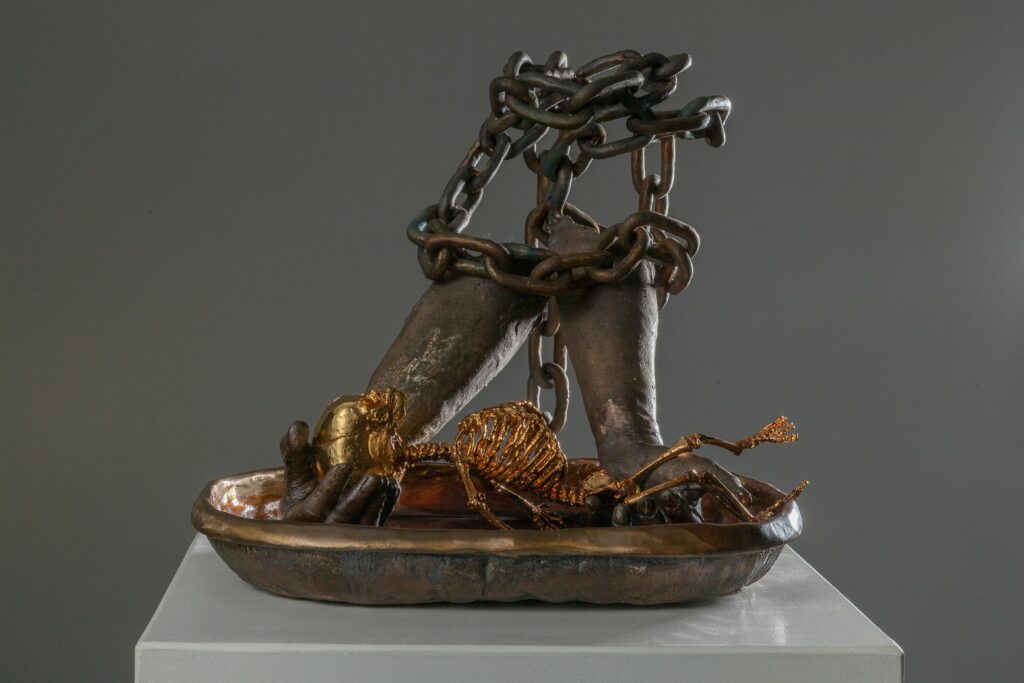 ArtX: How long have you been practicing art professionally, and when did you consider yourself a real artist?
NFN: I decided to be a professional artist at age 27, ten years ago. I knew I was an artist at age 13. That’s when I understood that my eye and technique were good enough to achieve photorealism. I couldn’t comprehend anything beyond that (because I was a kid), so I kind of quit. I messed around with art (mostly with ballpoint pens) for the next decade and a half, but when I decided to do it for a living, I went first into glass sculpture, then other sculpture techniques, and then 2d mixed media. I’m currently painting.

ArtX: Tell us about your training, formal and informal. Did you go to art school?
NFN: I didn’t go to art school. I went to a liberal arts college for four years and majored in art but didn’t really study. I was the kind of art student that would stick paper to a wall with a piece of gum and say that was my art. I was bored. A week before senior shows (required for graduation) my senior show was revoked by the school (because they didn’t like the content of it), and I ended up not graduating. 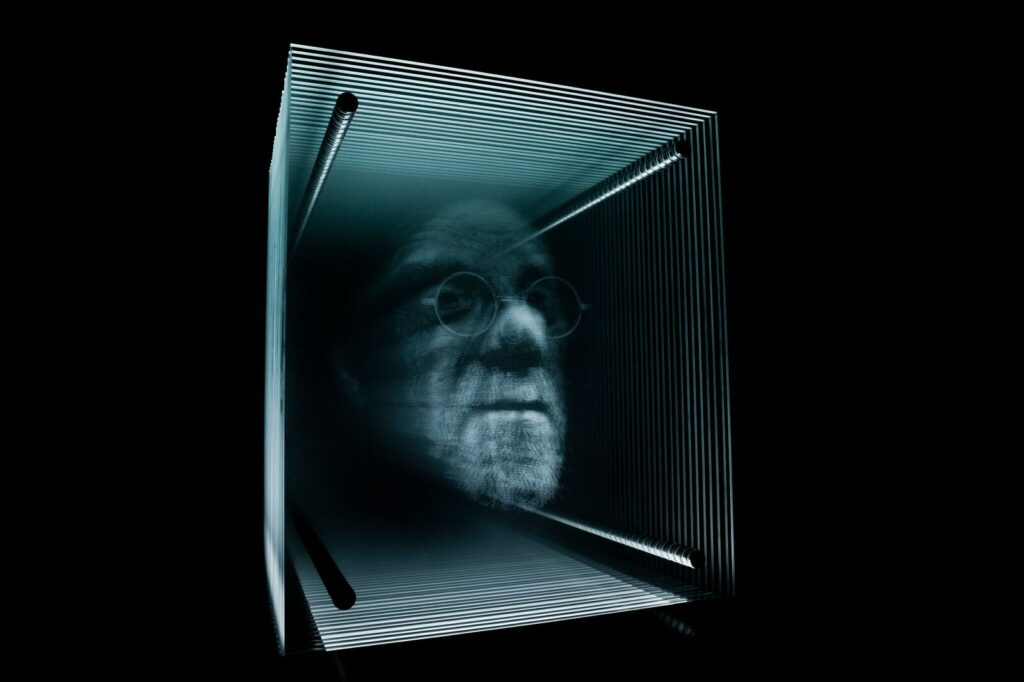 ArtX: You have worked with many mediums. What medium do you prefer to work in and why?
NFN: I like any medium that gets my point across. I love referencing other things to make my point. In doing so, I think the references bring their own history, meaning, and baggage, and when juxtaposed, create a conversation within the piece. My paintings upset a lot of people. They say I’m just copying. That’s kind of laughable because it’s exactly what I’m doing (even though I change their work and integrate it with other works.) After we have established that I’m just lifting other people’s work as a painted collage, the question becomes, why I’m doing it? I wish those that got angry would consider why I’m using the technique rather than getting upset at the technique. In a world where art is so open, I don’t consider any technique to be especially shocking. I could make a collage, rather than paint a collage, or I could smear feces on a wall, or I could make a sculpture out of nails— it’s all the same. The question is, why? What is the artist saying?

ArtX: Your work is highly conceptual, packed with themes and symbols. Tell us about some of your favorite pieces and explain what the symbolism or concepts mean? 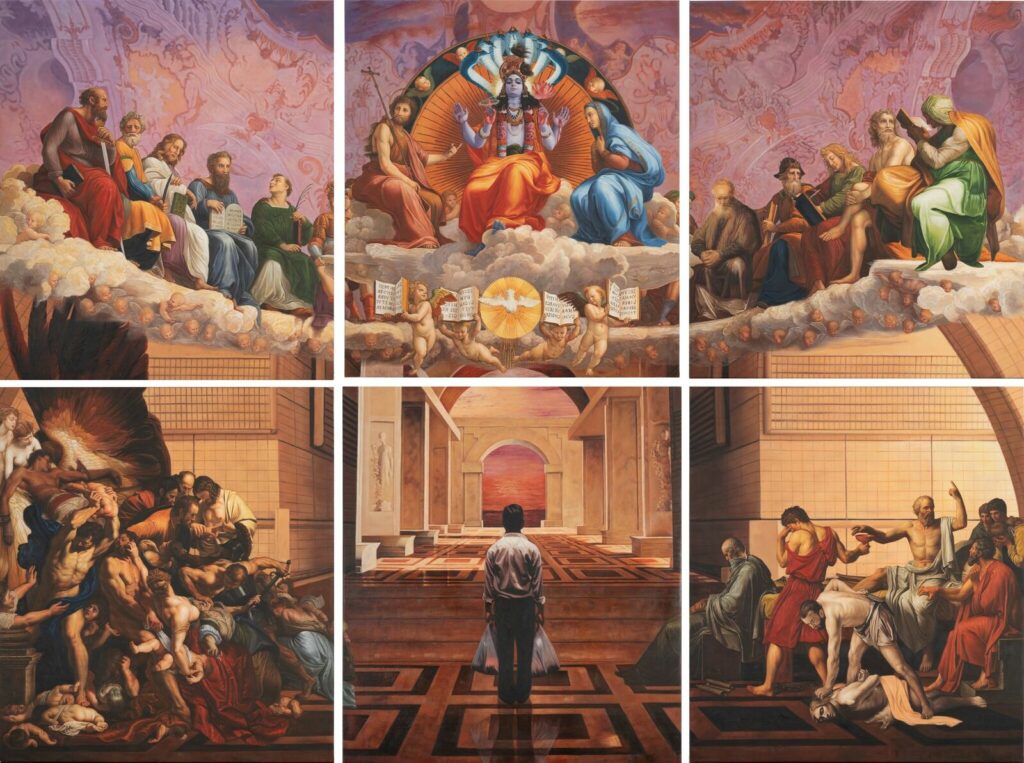 NFN: The funny thing about me is I always love my next piece the best. It is hard for me to look back. My favorite work I have done is probably my Kalki series. It appears, on the surface, to be much less cynical than some of my other work. Another series, for example, titled “If Jesus Came Back We’d Kill Him Again”, portrays modern martyrs like Martin Luther King and Steve Biko with luxury branding on top of them. The idea is that great men die an ideological death as well as a physical one. We take their ideas and legacy and distort them until it’s gone. The church most certainly has done that with Jesus. I have nothing against any religion or church, but if we just look at the money involved we can see that Jesus may not have been preaching these ideals. 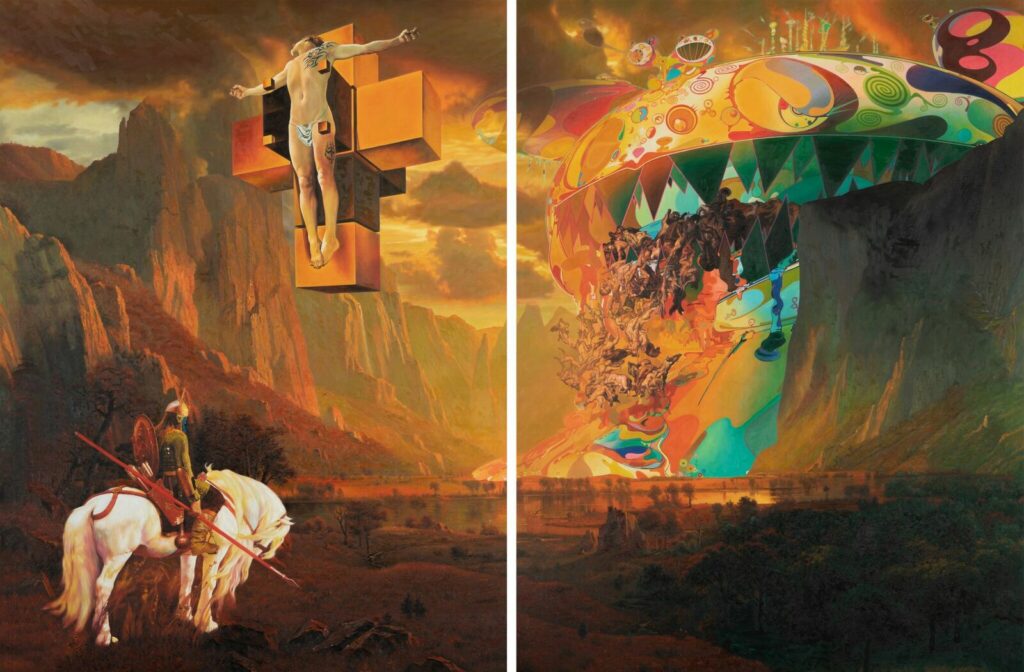 My Kalki series tells the story of the tenth avatar of Vishnu, Kalki. It consists of ten paintings that tell a linear narrative using other famous paintings that have been combined and modified. It is said Kalki will come to end this age of man and bring us back to a more innocent age. Like I said, this appears to be less cynical, but it is equally so. Kalki comes to end this age because it is an age of filth, liars and disrespect between people. Despite it appearing to be an uplifting story when viewed sequentially, it remains as a commentary on the state of the world.

We are in troubling times. So much so that we cannot imagine that any other times existed. I don’t dispute that human nature has probably changed very little. But human nature also involves the individual being influenced and changed by their surroundings. Here we live in concrete cities and have lost so much touch with the natural world. We have no contact with where our food comes from. We have less actual physical contact with the community than ever before. We drop our children to people we don’t know to care for them. It’s a strange system.

My masterpiece of that series is probably Duty and Consequence. It is meant to represent the great war that Kalki presides over, and it is formed inside of Hokusai’s great wave. Inside we have genocide, betrayal, battle, honor, gods falling from the skies, the death of children, assassination, duality, and calm. War is not a simple thing. I believe I was able to show that.

ArtX: Where do you get emotional support?
NFN: Both of my parents have been very supportive in my career. My wife is a tremendous support. She is the center of my life and that translates to my work. I intuitively look to her for my understanding of things.

ArtX: How has your background in music informed your work?
NFN: My background in music has informed my composition in many ways. First that I try to have space and harmony in the composition, and second because I am very interested in sampling and that has been how I approach art. My work very heavily recognizes the work that it comes from. Everything in my work is a reference to something else. Through these references, we can piece together some meaning. Without knowledge of the references, I think it still holds up though. In music, I learned all the different ideas and ways to cut a sample, and I use those same concepts visually.

ArtX: Who are some your strongest influences?
NFN: My influences come very much from the world outside of art. I grew up reading comic books and Robert Crumb, Dave Sim and Gerhard in Cerebus, Frank Miller in Dark Knight Returns and Sin City, and many of the early “image comics” guys were a major influence on my visual vocabulary. My interest is always in structure and concept, and you can find that in any medium. Now that I’m older, my influences are even further from the art world. The compositions of Charles Mingus have had a huge influence on how I understand composition. He borrows from so many different areas of music and makes these insanely wild and complex structures that he then plays like a mad man. The book, The Three-Body Problem, by Cixan Liu, and its sequels, have been an influence in the last few years. In the last months, I’ve been reading (Charles) Bukowski. Most of my influence comes from story and music. Very little influence has come from the fine art world. 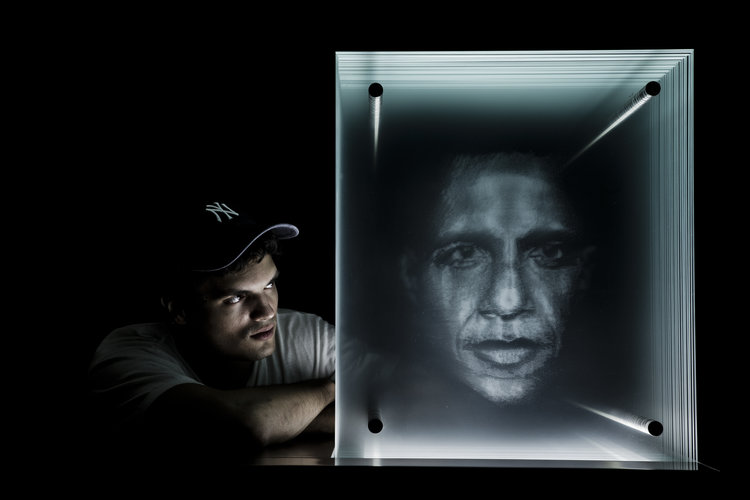 ArtX: You often reference celebrated faces in your work such as famous athletes, or musicians. What is the inspiration behind that?
NFN: My work is often an examination of the viewer. It’s really a request for the viewer to think. I use known iconography to make that point, and no iconography is off the table. celebrities are mostly something that exists in our imagination. We don’t know these people. our judgments on them often are just a reflection on how we want others to see us. We don’t see them as three-dimensional human beings with good qualities and faults. When Nelson Mandela died, hundreds and thousands of people who had never given him a moment’s thought, rushed to tweet how hurt they felt, because they imagine him to be a saint, and their showing remorse is a good reflection on them. He was just a man that did amazing things and I didn’t know him. I made a sculpture of Kim Kardashian and people almost invariably remark, “ugh, why her?” That’s exactly why. I don’t know her and neither do they. They just have their construct of who she is based on tv. I use those constructs to make my point. 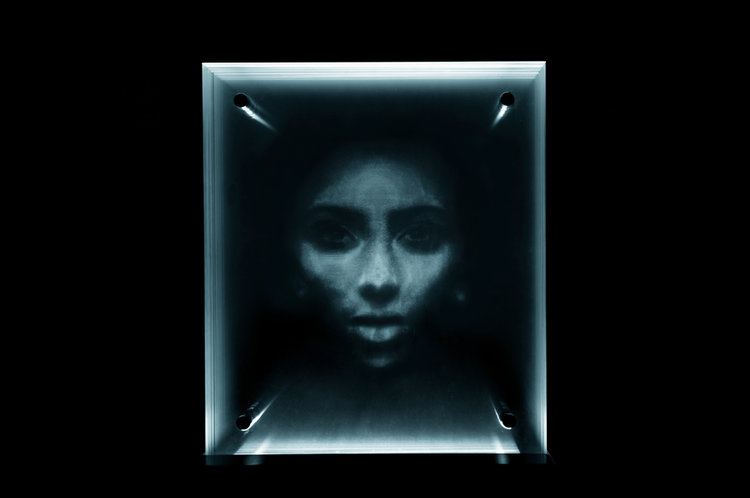 ArtX: Tell us about your studio practice. What do you do to get ready to work? Do you listen to music while working?
NFN: I like to listen to audiobooks a lot of the time. I find that I must keep my mind engaged; it is rare that I must think in the process of making a piece. Most of the thought comes in the planning. Once I’m making it, there is no thought. It’s just mechanical.

ArtX: What are you working on now?
NFN: I am working on a series of paintings about America. It is a strange series. One piece is an oil painting of Malcolm X’s dead body that I painted a copy of a Rothko over. you can still see the body slightly beneath. Another is Jasper John’s Three Flags (1958), painted over a painting of the Wounded Knee Massacre, where several hundred unarmed native Americans were shot. I have ones that are slightly subtler as well. 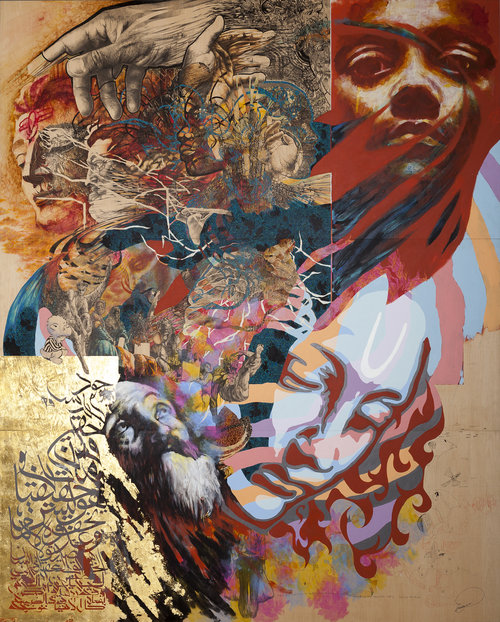 ArtX: Do you have any projects or shows coming up?
NFN: I have a show coming up in late June in Los Angeles. It will be the grand opening of Gallery IV, located at 7969 Melrose Ave. It will be a solo show and I expect to have a dozen or so of my works there including some new things that I haven’t shown or posted anywhere. So if you’re in West Hollywood on Friday, June 28th, come by for sure. It will be worth looking at. Two very large works will be there. My largest canvas to date will be unveiled. 12.5 feet wide by 9 feet tall. Tho