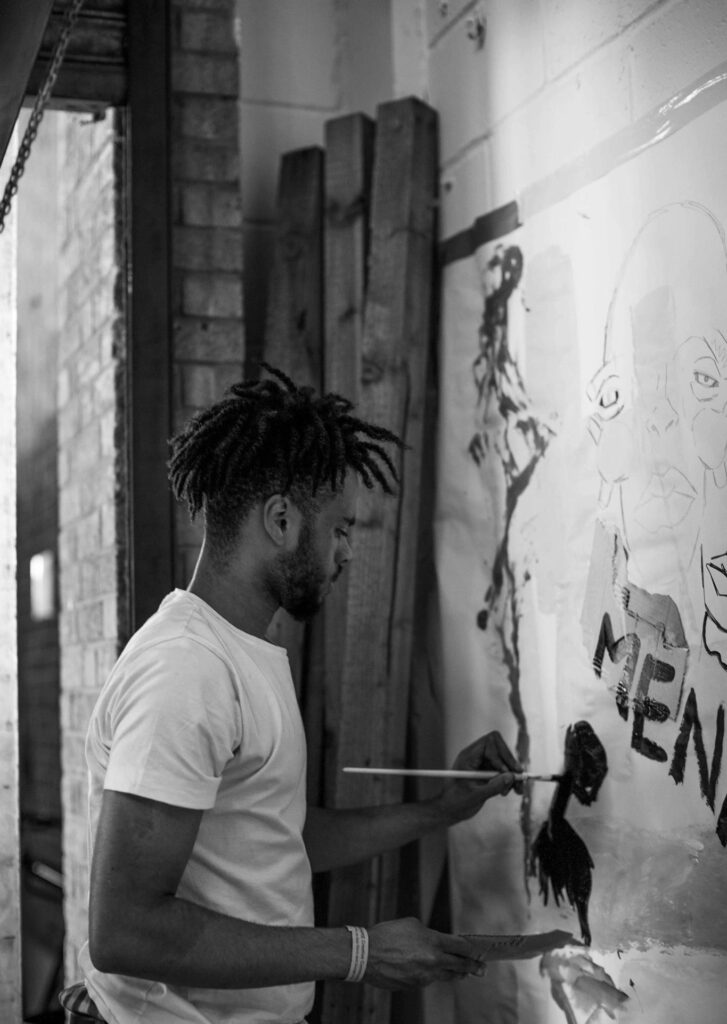 Cam Portland is an abstract expressionist artist based in South London. His work predominantly speaks to culture, identity and social issues. In this Artist Spotlight, Cam takes us through his process and describes his latest body of work titled “The San People of London”. The series is heavily influenced by the San Bushmen tribe. The San people are one of the world’s most ancient people and reportedly the oldest race in Southern Africa, dating back 20,000 years.

Distinguishing facial features such as their protruding cheekbones, broad noses and fuller lips, are a focal point that parallel with Portland’s images. Once used as the basis for racist overtures, Portland’s highlighting seeks to educate, celebrate and challenge the now fetishization of what was once paired with absolute negative connotations.

Artist’s Statement:
My works are recognizable by the vehement use of color and dramatization of black features of which are heavily influenced by a small tribe in Africa known as “The San People”. Eyes, lips, noses and cheekbones are celebrated, subverting the secular stance on beauty. Negative stereotypical descriptions and connotations can also be found throughout, ultimately creating a juxtaposition and inciting a dialogue.

Having always had an interest in the creative arts, when dissected, my pieces reveal influences from artists such as George Condo, Pablo Picasso, Tyrone Deans and Faith Ringgold, a midst pop culture intertextuality.
-Cam Portland 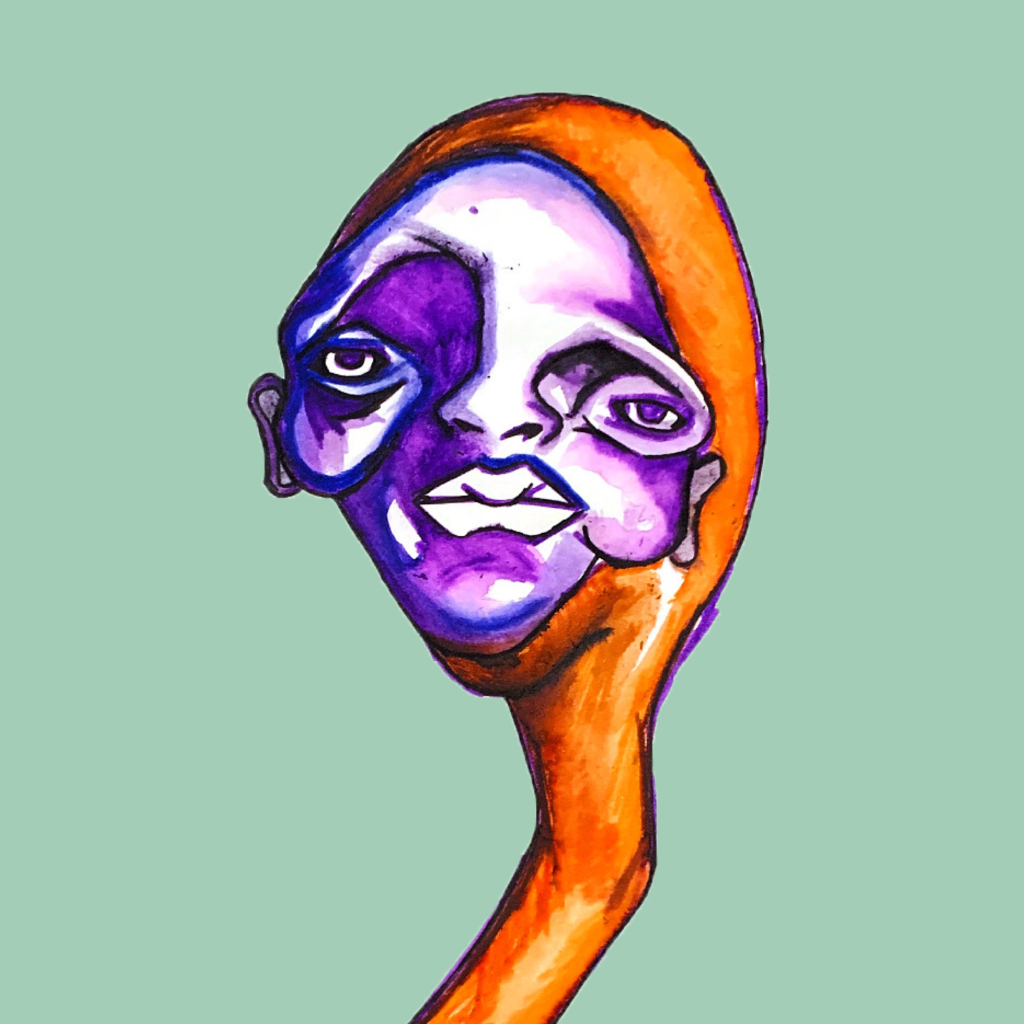 ArtX: Tell us about you as a person.

I’m Cam Portland, an artist, illustrator, and designer from Streatham in SW London. I’m of Jamaican descent, my parents are from the Portland Parish in Jamaica, my mum is from Cornwall Barracks and my dad is from Gingerhouse.

How long have you been practicing art professionally, when did you consider yourself a real artist?

I’ve always been into drawing. My dad was the first person to have a comic book strip in a newspaper back in the Caribbean in the 80s, so growing up its always been a thing. I used to draw Dragon Ballz characters, wrestlers and loads of cartoon characters. So really and truly only until last year, around the time of my first exhibition, when I was making art on a regular basis. Before then, I’d say I was trying to find myself. I knew an artist is what I wanted to be considered but just had to transition from a guy that paints in his free time to an artist. 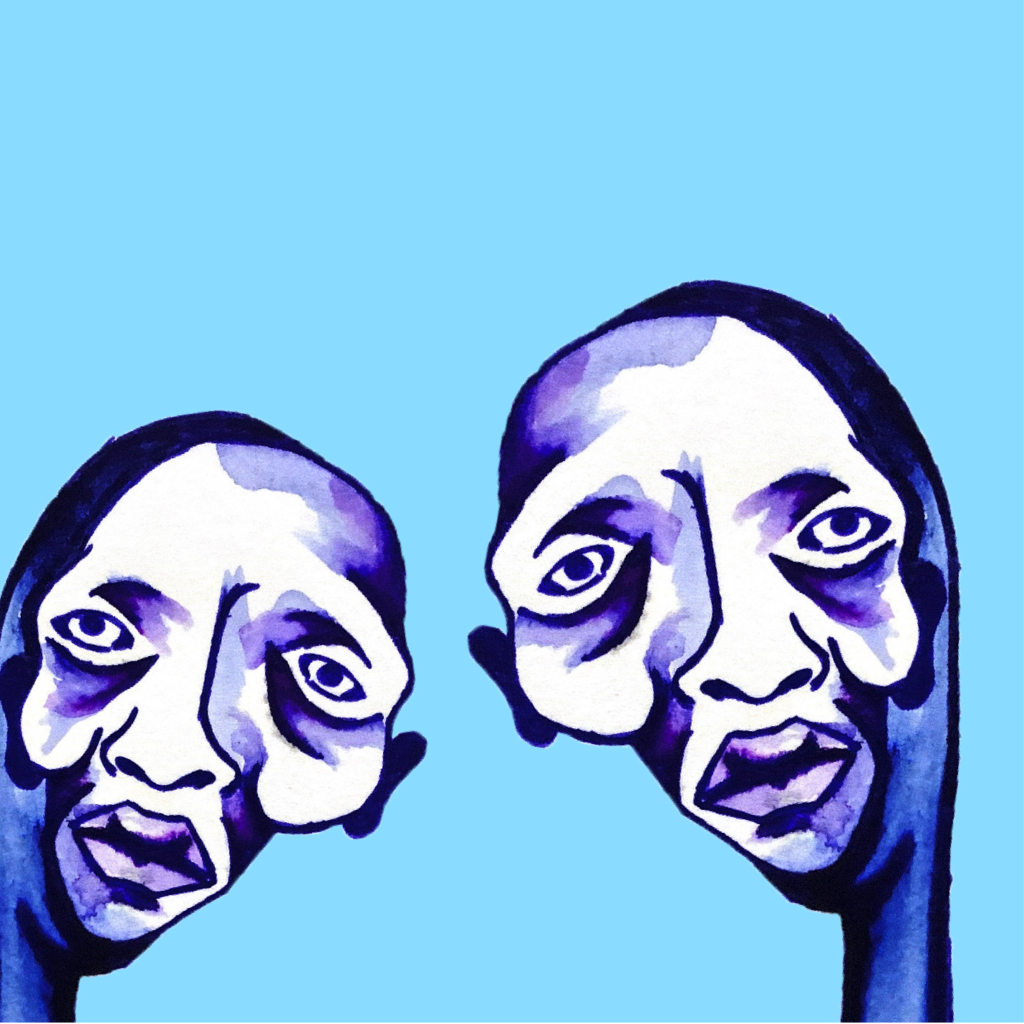 Tell us about your training, formal and informal.

I studied art at GCSE and A-Level, but I didn’t feel passionate about it until the later stages. I felt restricted, I was more being told to emulate the style of other renowned artists rather than to express myself. When I got to university, where I studied Interior Architecture, I found myself drawing in lectures and painting in my free time rather than doing coursework. Slowly but surely, I just nurtured this expression.

What medium do you prefer to work in?
Six months ago I probably would’ve said acrylics and oil paint, but as of late, it’s been a lot of different sorts of pens and watercolors. I’ve been digitizing a lot of my work recently as well while playing with graphics etc. 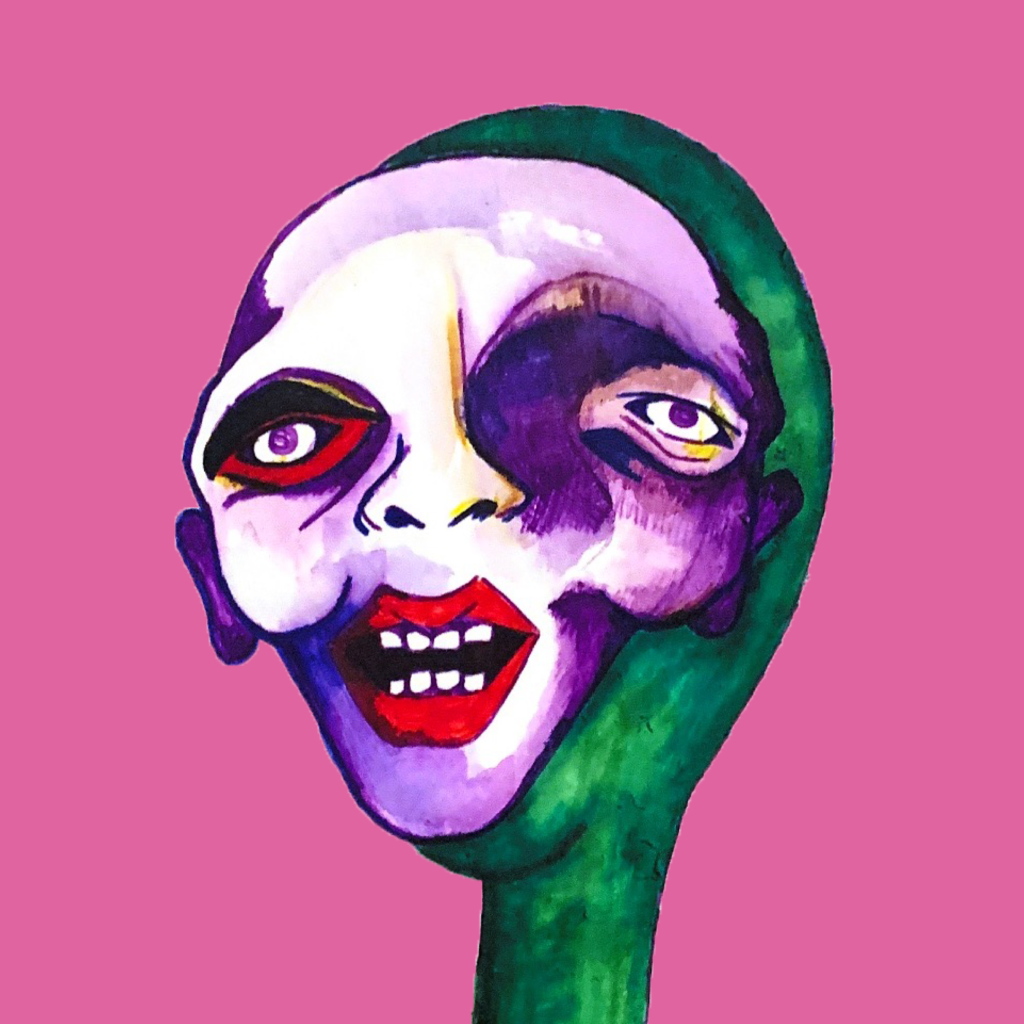 George Condo, Tyrone Deans, Ellen Gallagher, Faith Ringgold. To be honest there’s quite a few but for me, it’s all due to their use of color, shape and character features. Kanye West is a massive one, Kid Cudi and Pharrell. 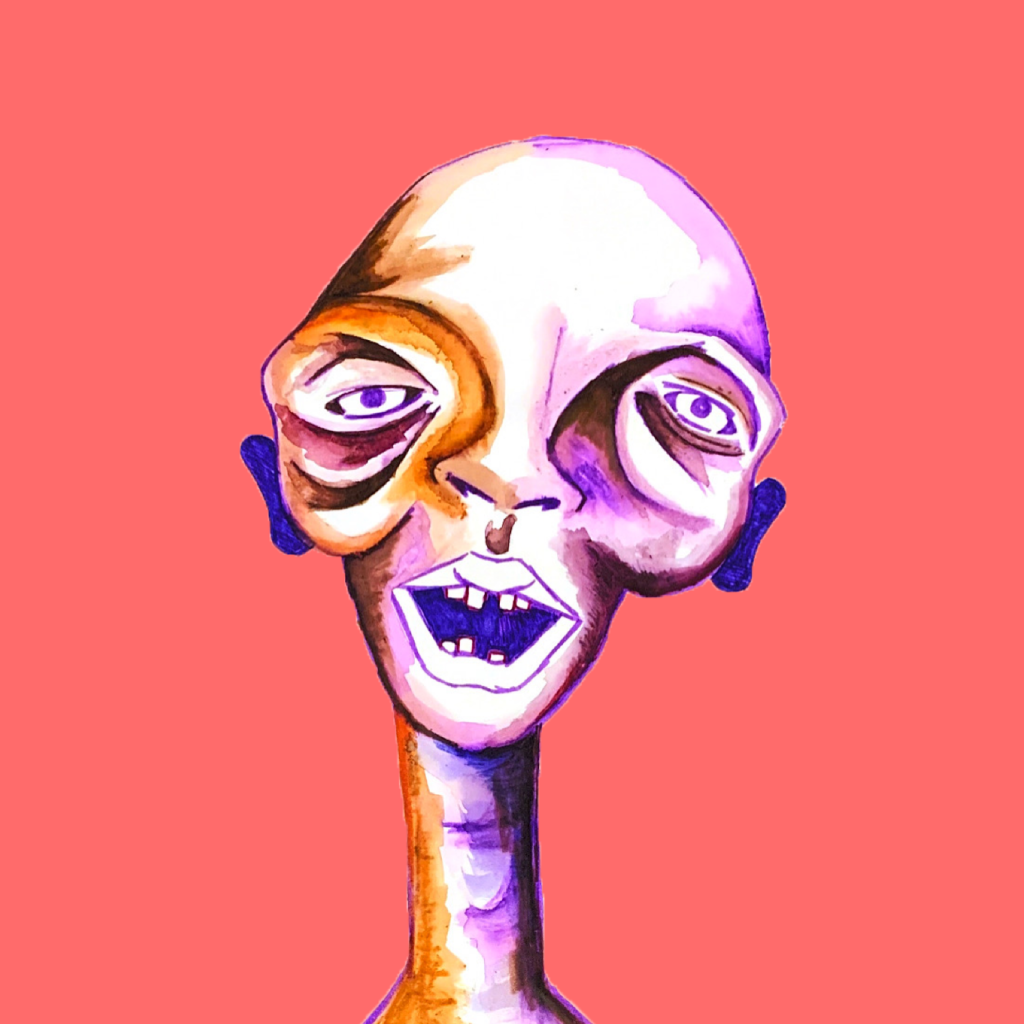 When do you know when a work is finished?

That’s a tough one for me. Sometimes I find myself going back to some artwork days or even months after I thought it was complete. Over time, just looking or sharing pictures with family & friends, I tend to develop a new perspective on some of the pieces that need to be added. This method doesn’t always work but ultimately reflecting and asking myself “is there enough detail already or am I just doing too much?”

Tell us about your process when working. Do you listen to music or perform any rituals to get yourself ready to make art?

Listening to music or having a documentary playing is essential to my process, I get more inspiration that way. I can’t work in silence, so I listen to any and everything from civil rights documentaries to Kojey Radical & Swindle. 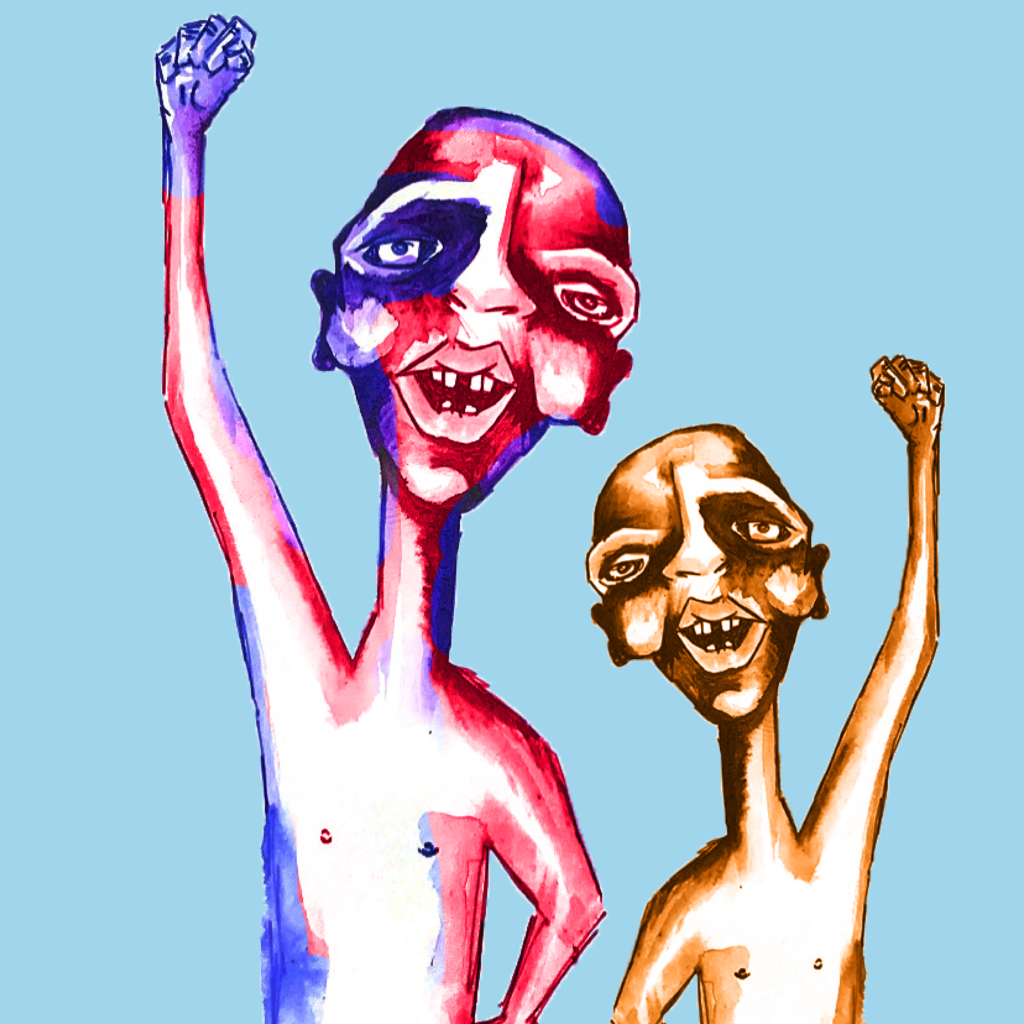 What are the meanings and the concepts behind this particular body of work?

Many of the characteristics of my caricatures are influenced by a small tribe called the ‘San People’ which has been said to be the “purest form of black people’. Tribe members share very strong features. These features are deliberately used within my pieces to highlight and celebrate those facial features.

What do you want viewers to take away from your work?

When people see my work, I want them to feel something. Ultimately, I want my work to evoke emotions from the viewer and spark the necessary conversations within my community. 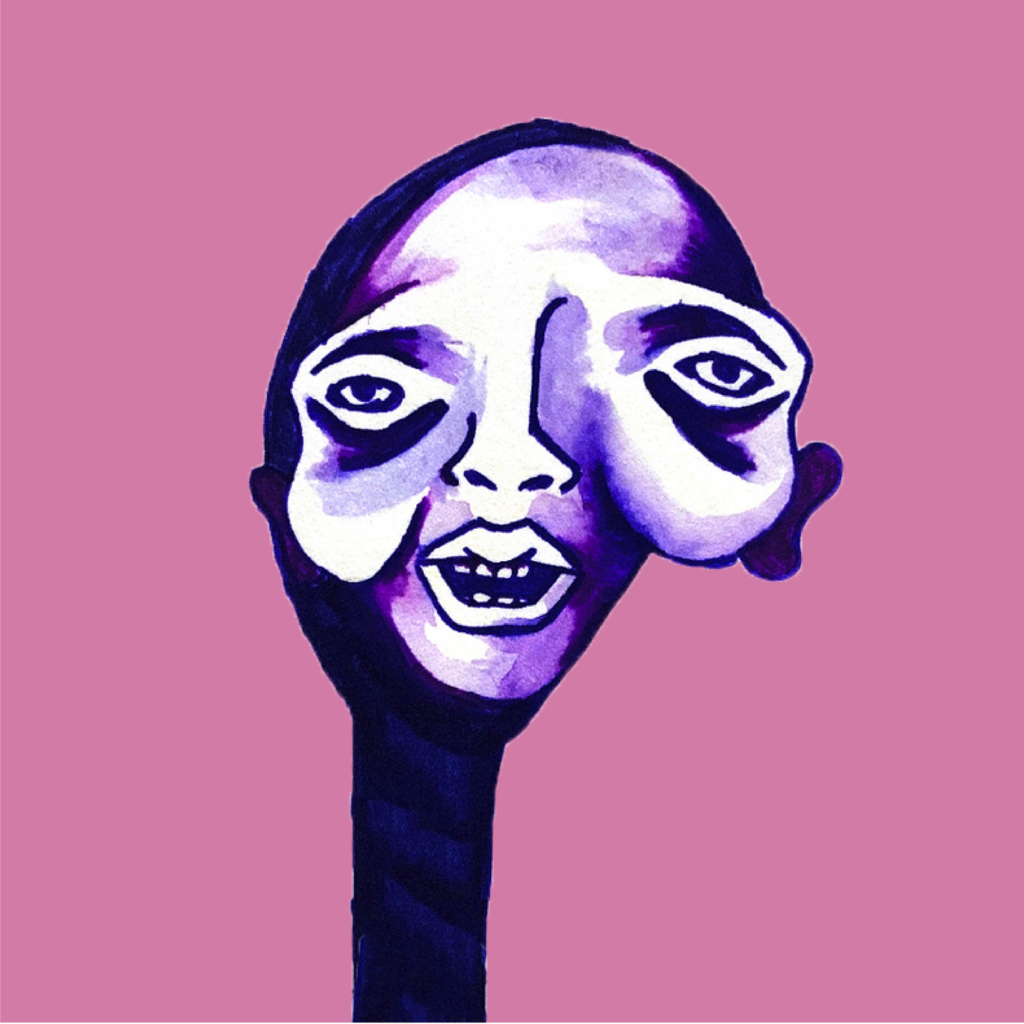 What are your biggest goals as a visual artist? And what has been your proudest moment professionally?

Not to necessarily be a household name but to have my work be recognized and featured in various ways. I don’t just want to have art on canvas. I want my art translated through clothing and advertising.

Two of my proudest moments were showing at my first exhibition last year and being featured on the illustrators’ wall at the #Merky Books event. I’m super appreciative for the opportunity. Both events were a success, the vibes were right, and it brought so many creative people under one roof with my art in the room.