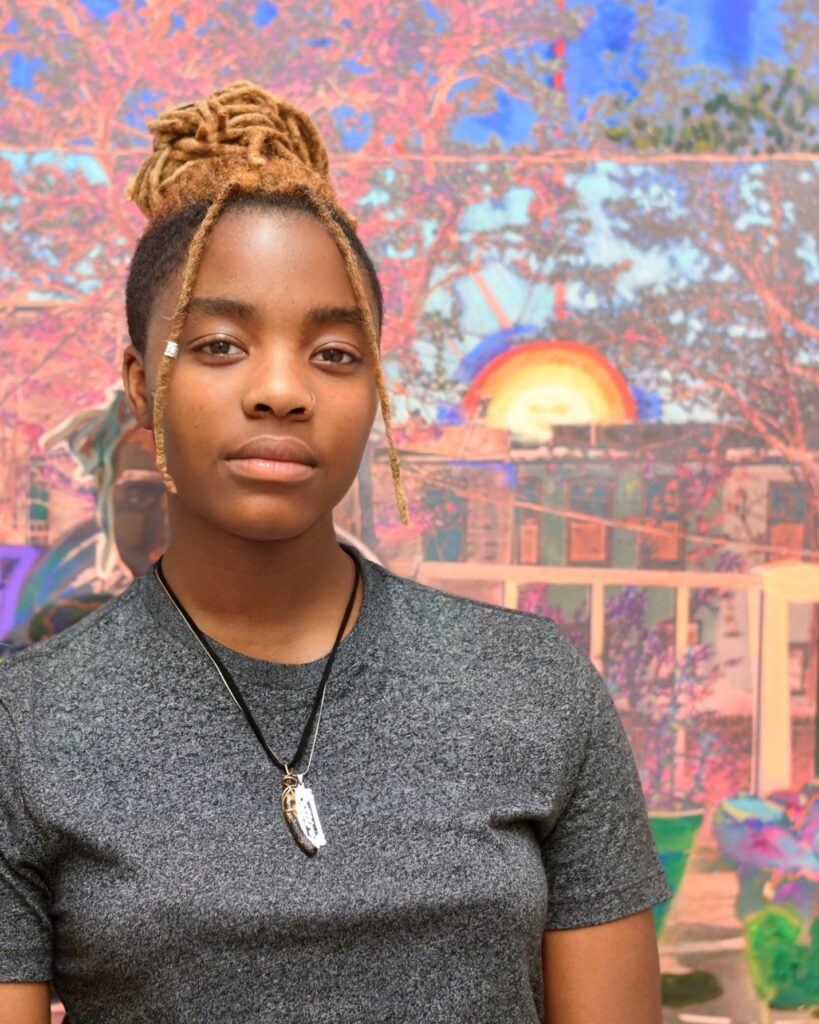 Baltimore based emerging conceptual artist Amani Lewis talks to ArtX about her beginnings as an artist, her commitment to social justice and community activism, and her latest series Negroes in the Trees. 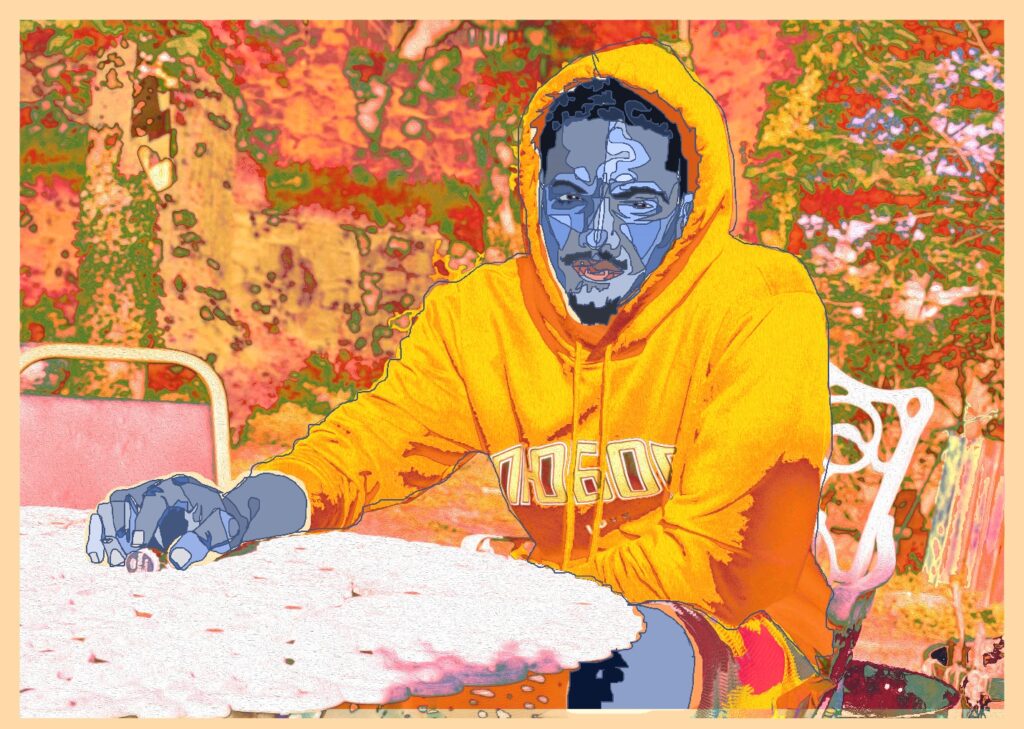 Recently, while attending Expo Chicago, a young artist greeted me excitedly, saying, “I just sold out! I sold all of my pieces!” Understanding what an awesome feat this was, I immediately went to the De Buck Gallery (NYC) booth to take a closer look at the work of Amani Lewis. I was fascinated by her use of layering that combines digital and traditional methods with collage and photo manipulation techniques. Instantly I understood why her pieces sold, and I began to feel the warmth of excitement that she felt, for I knew this was the dawning of a fledgling career with limitless possibilities.

Amani Lewis is a conceptual artist based in Baltimore, Maryland. Lewis earned a BFA from Maryland Institute College of Arts in 2016. Her time at MICA was very formable while introducing her to new techniques such as: photoshop, drawing and painting anatomy, silk-screening, printmaking techniques, and photography. Lewis credits those years of higher learning for her current practice of mixed-media.

Lewis entered MICA, located in downtown Baltimore city, as an illustrator, however, she soon began to form her own voice, and developed work that incorporated various mediums and techniques. Once she changed her major to General Fine Arts, with a concentration in illustration, her artistic point of view expanded, anchoring her skills in a unique style using digital collage and drawing techniques. 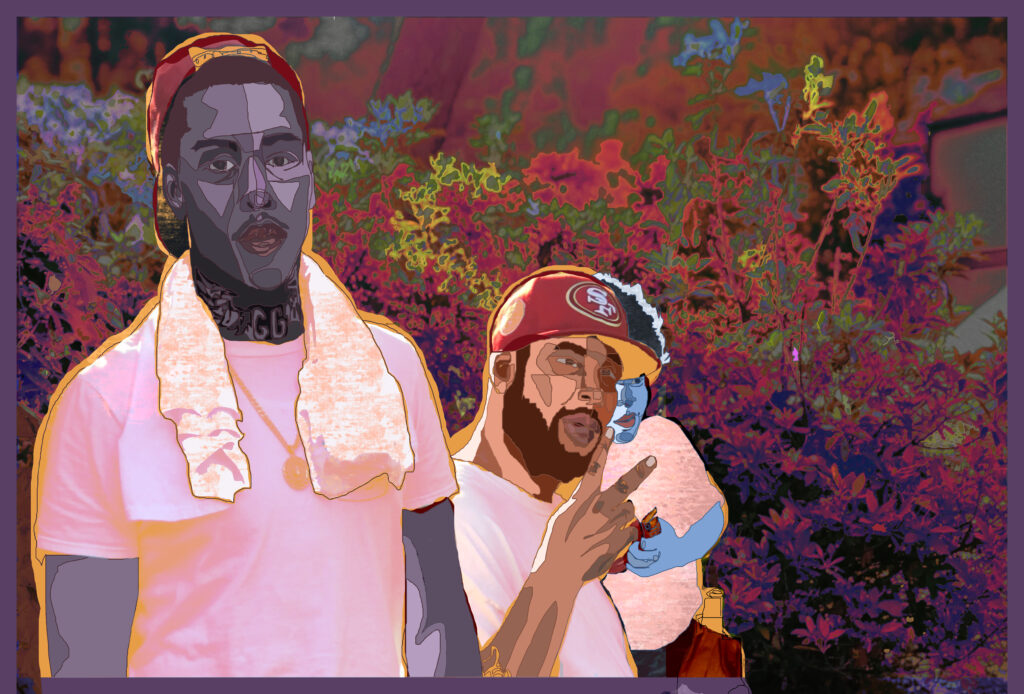 “General Fine Arts at MICA, is a self-taught/all-day studio practice major. I think the idea is that you start taking the skillsets you have already and just explore. Gaining a studio practice that no one was going to keep me accountable, really helped me understand why being in the studio was so important,” Lewis says. Lewis’s style is in dialogue with anteceding contemporary art historical references, echoing profound and prolific image makers such as: Romare Bearden, Njideka Akunyili-Crosby, Jordan Casteel, Dawoud Bey, Kerry James Marshall, David Hammons, Charles White and Liana Ambrose-Murray. 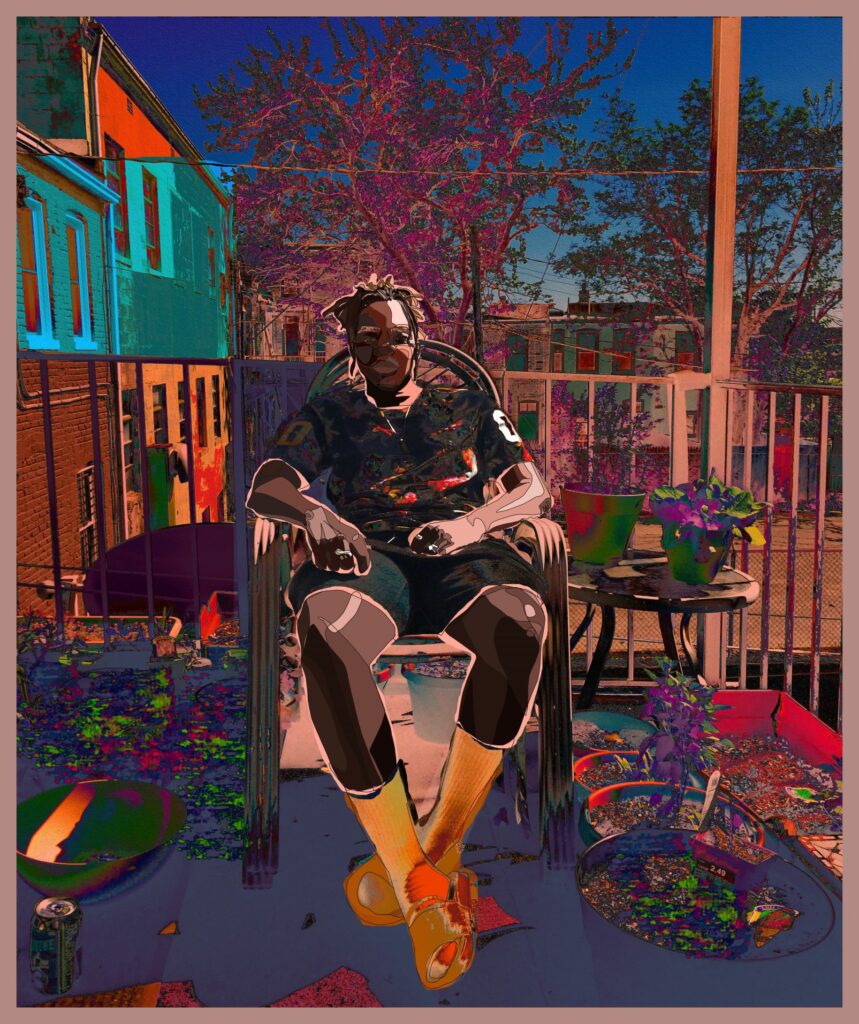 Amani Lewis, Negroes in the Trees #5 (a self-portrait) 2019, Acrylic, glitter, pastel, and digital collage on canvas.

One of her first critical works was done in 2015, a series called Censorship, based on the Freddie Gray uprising that took place the same year. “It was a shift in my thinking and perspectives/community engagement,” Lewis explains. “After that series, I knew what I wanted to do with my art, and it was after that series that I began getting into shows and making sales to give back to my community”.

Lewis found flexibility with the use of mixed media that further developed her into a conceptual artist. Deploying various techniques and materials allows her to instill different meanings within the work, while representing the millennial generation that is heavily influenced by technology, social media, and the internet at large. Her work is both a meditation and interrogation of how much contemporary society experiences everyday life by viewing it through screens and lenses. 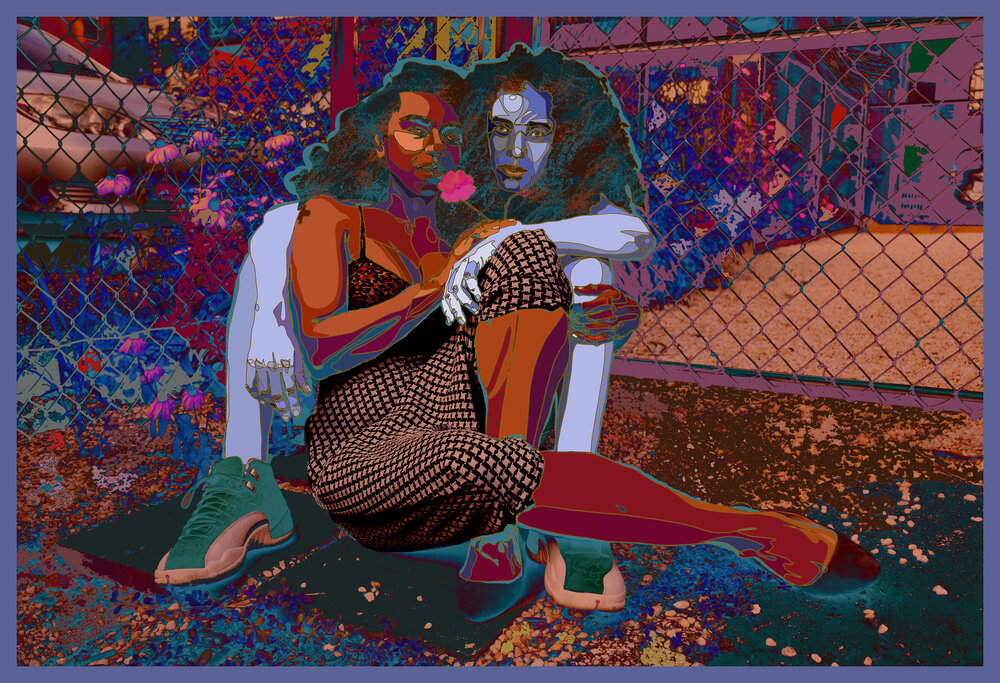 Negroes in the Trees #10 (the breath to my fire), 2019. Acrylic, pastel, glitter, textile and digital collage.

“I started doing these one-line drawings to quickly jot down the figure, and the scene I was in, I didn’t want to take as many photos anymore. It felt rude, and like I wasn’t present.” Lewis started the one-line drawing technique, informally, during the anti-police violence protests of 2015, and revisited the technique in 2019. “Now, I enjoy taking all of my interests: photography, illustration, drawing and painting while playing with new mediums, and just putting them all in a painting,” she says. The artist admits to being driven and consumed by technology, especially social media, and uses it as an aspect of her work. 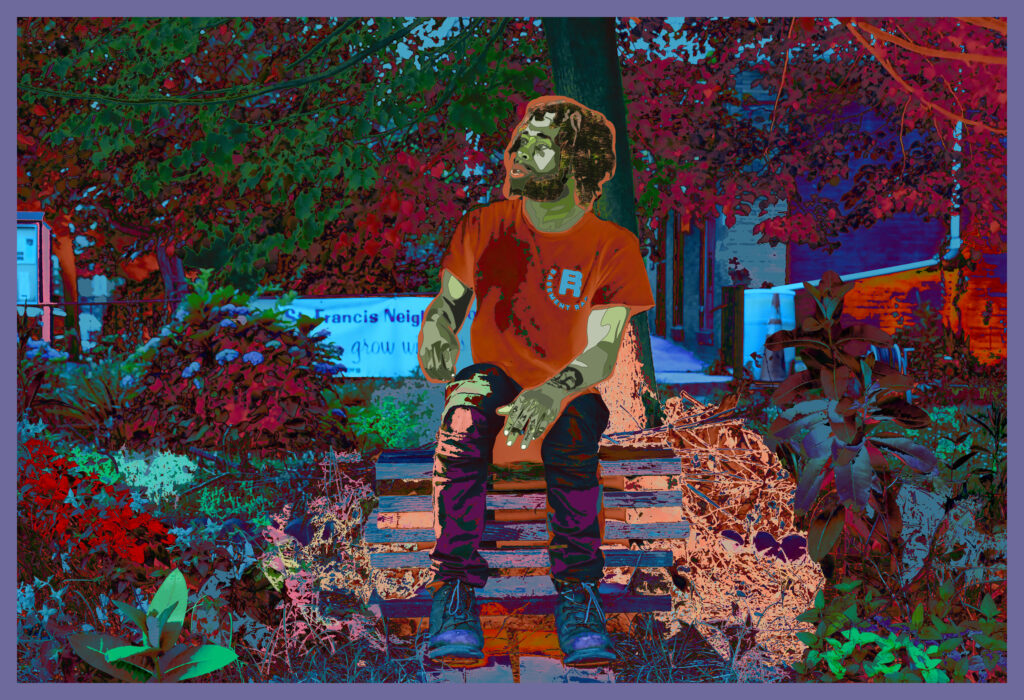 Lewis’s latest body of work, Negroes in the Trees, consists of eleven portraits of friends and family members. Each portrait is based on a photograph of the subject, rendered digitally, then printed on canvas and rendered further, incorporating paint, glitter, and textiles. In this series, she considers how visual art serves as a kind of social activism. Negroes in the Trees interrogates Black people’s historic relationship with sustainability, architecture, and nature, in collaboration with contemporary acts of healing, guidance, safety, musical performance, and magic.

“With this series, I am thinking about collaboration and social justice, manipulating the viewer in the ways that we are often manipulated by certain news and perspectives. I’m also thinking about the Great Migration and how people even got to cities like Baltimore. I reference a quote from Bryan Stevenson of The Equal Justice Initiative, Black people arrived in cities like Baltimore as ‘..refugees, exile from lands in the South where they were being terrorized.’ Surveillance and the people’s stories are also a big portion of the work as well,” says Lewis. 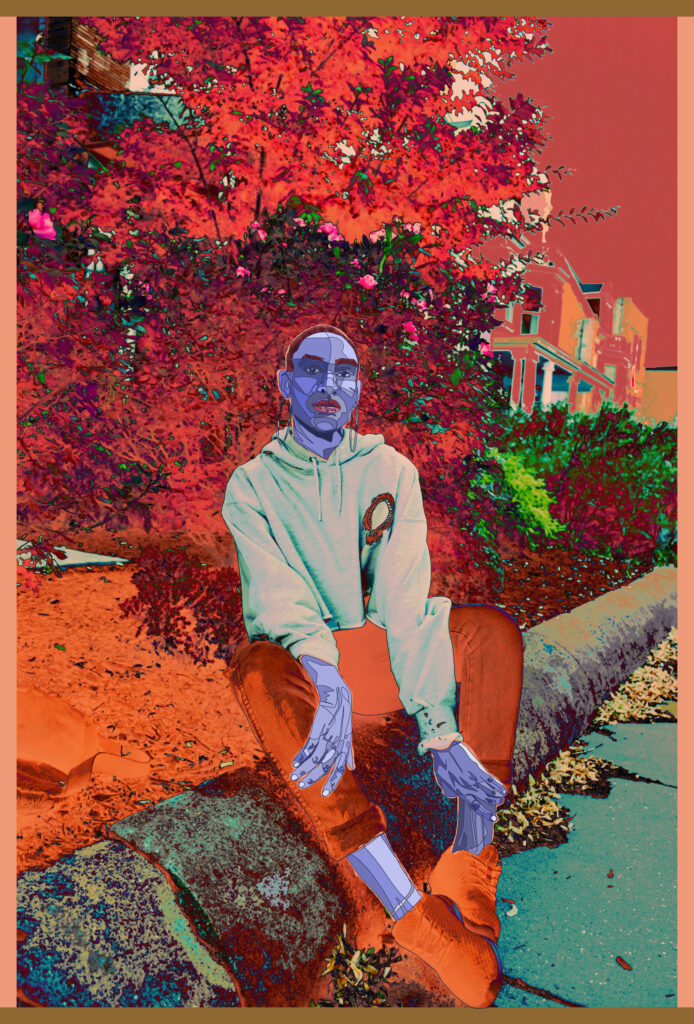 Lewis uses urban landscapes in the series to depict beauty and tranquility, pushing how nature is defined by addressing how Black people within urban environments are often taken out of the conversation, a concept Lewis refers to as subjective nature. “All too often black identities are likened to trauma. I believe that nature as it relates to Black folks, also relates to our ancestry and the rich ways that we coexisted within and cultivated that nature,” says Lewis.

Perhaps the most successful element of Negroes in the Trees is that the work requires viewers to dialogue and to be receptive to new stories, and livelihoods, about a marginalized and misrepresented group of people. “I hope folks who see the work, fall into the concept, but bring new ideas to the work and share their experiences and the experiences of my subjects to other folks and so on,” says Lewis. 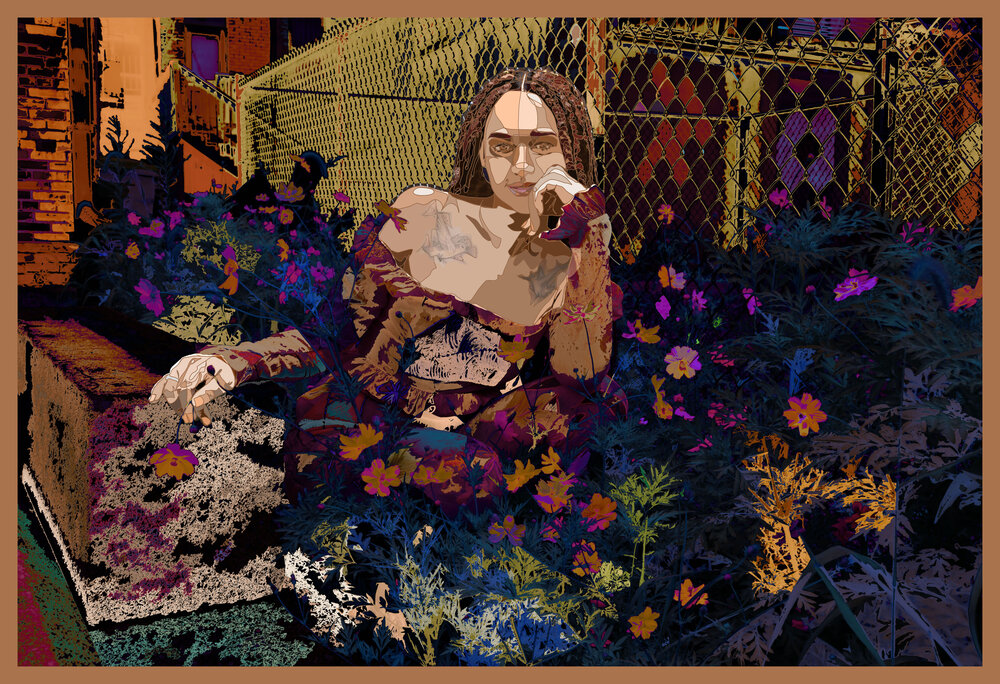 I asked Lewis what her goals of being a young artist were and this was her response:
My biggest goal as an artist is to continue to uphold a concept, I read Charles White state, which was to embed the forces of liberation in my artwork as a Black creator. I am happy to have put myself out there, meeting new people, listening to their stories and their needs while being able to use my resources as an artist to create a piece about them. And when that piece sells, I give them part of the proceeds to help fund their dreams or take care of their personal needs, relieving them from the stresses they came to me with. I want to change the way we perceive black people in these urban communities, I want to help my neighbors, friends, and family members see their value, their grace and the reason why they are a crucial part of all of our histories and futures.

Currently, viewers can experience the artist’s work in the current exhibition Amani Lewis: Subjective Nature, currently on view at The August Wilson African American Cultural Center in Pittsburgh, Pennsylvania. The exhibition displays the entire series Negroes in the Trees and is currently on view until December 13, 2019.